Sharpies are used for many things in this house. If you’re a regular reader (thankyouverymuch!), you’ll recall that not only are they used to make ridiculous marks on food containers for the purpose of claiming them–much like a dog marks his territory by urinating on it–but they are also used to mark clothing tags with a dot so Jim and I know whose clothing is whose*.

Recently a Sharpie was put to yet another use.

The older boy’s clothing has a natural path:

Handed down to younger boy**

Never*** given up by younger boy

The younger boy’s dresser drawers hang precariously open approximately 137% of the time because he has so many items of clothing. He doesn’t clean out his dresser unless I remind him approximately 2,394 times, and when he finally does “get around to it”, his “get rid of” pile is the size of a toaster, or maybe a toolbox.

Some of the shirts he wears to bed look like those of David Banner, once the Hulk takes over:

We’ve tried telling him that he has enough shirts that fit him properly and it wouldn’t be a bad thing to toss some of the itty bitty ones, but…no dice.

Jim took matters into his own hands last week when he and I were folding laundry, grabbed a Sharpie, and threw the gauntlet down.

Surprisingly, it was well-received. (By the way, enjoy the gun show. His pose was intentional for you blog readers.): 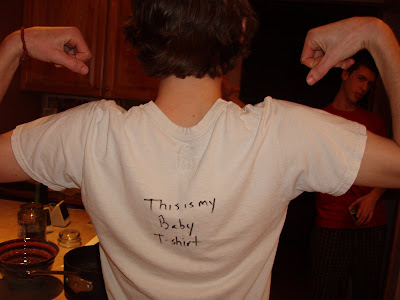 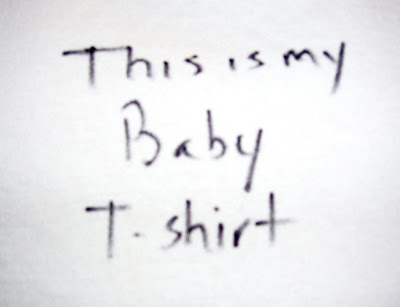 Unfortunately, his strategy backfired and the younger boy likes the shirt even better now. At least we’re saving on our clothing budget…I guess?

*That’s right, laugh it up. YOU try having two teen boys who wear *nearly* the same size in everything.
**I DO buy new clothing for the younger boy also. I’m just saying that the older boy’s clothing automatically moves down the chain.
***Ever.