I have had a terrible day.

Well, maybe it will be, just a little bit, but I don’t intend it to be.

I DO plan on ending on a high note after writing a very vague rant that really won’t give you much information at all.

Oh yes, Terrible Day, with a capital T and a capital D.

It wasn’t the worst day ever, and my problems truly are not catastrophic in nature, so I’m thankful for that. But this day has been extra long: I woke up at 3:15, unable to return to sleep. Blech.

In the past, I have referred to this sort of mood I’m in as “ridin’ the rage”. Things are just pulsating around here like a pressure cooker. I feel like I did on the day when I actually said to my poor, unsuspecting family and in all seriousness, “I’VE GIVEN ALL I CAN GIVE!!!”

The feeling is very, very similar to (sorry, gentlemen) the hormonal shift right before Aunt Flo comes for her stupid monthly visit, you know, when you feel the anger bubbling up inside and you’re doing everything to push it back down so you don’t vomit it up all over the wrong person. (or any person, really, because nobody deserves that!)

I sent out this tweet before leaving to go to work: 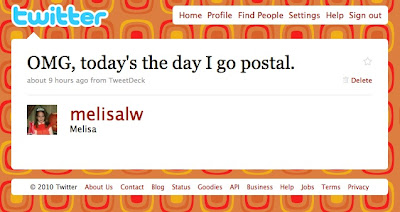 And, with the day I had at work, I consider it a miracle that I kept things in check and avoided being wanted in six states for crimes too gruesome to describe on the evening news.

I did it. I got through this day.

Work ended for me today at 3:30 and I sailed home; I was on a mission. I had a really great opportunity this afternoon to turn my day right around.

I had a prearranged “date” to chat on Skype with my not-so-evil German “twin”, Kat. We talked and laughed and caught up for thirty minutes (and her adorable hubby was chiming in regularly too, much to Kat’s dismay!), and–miracle of miracles–I actually feel BETTER. She told me about the work they’ve been doing on their new house, I told her about what’s been going on around here, and we talked about how Jim and I are really getting pretty sure that we (and the boys) will indeed make a trip to Munich late in the summer and stay in her new guest rooms. Just thinking about it makes me a little giddy.

Kat: Thank you so much for being on the other side of the pond my computer monitor. I feel so much better now! Believe me, my family would thank you if they could, because they’re not too fond of the Mama Drama. Give H. a hug for me, and then tell him to give you a hug for me! xoxo

Everyone else: Keep your fingers crossed that the rest of the day only gets better from here!