I like Pepsi. I don’t love Pepsi. Although I believe Pepsi to be a very suitable second-best, I’ve been a Coca-Cola girl for ages. Why? I just like it better. Don’t hate: if you prefer Pepsi, I’m not judging you. There are “Pepsi people” and “Coca-Cola people” as much as there are “dog people” and “cat people”. Of course, the fact that I consider Pepsi to be a very suitable second-best combined with the fact that I have always been a soda freak* means that I will always request Coke at a restaurant first, but if Pepsi is what’s around, I’m drinking it. (Fickle? No, just thirsty.)

I was in the store over the weekend and saw something that made my ice-cold Coca-Cola heart soften up a little bit, a bottle of Pepsi with a “throwback” label. SO. COOL. I totally never thought I’d see THAT again. 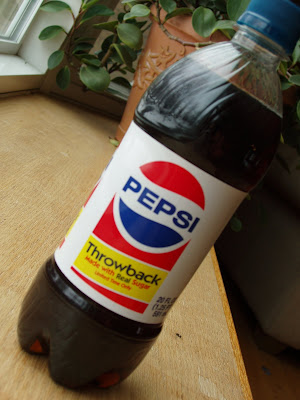 Mentally, I was immediately taken back to childhood and found my head swimming with memories that could easily been straight from a warm and fuzzy soda commercial**. I remember doing cartwheels in my best friend’s front yard, helping my mom with our twice-yearly garage sales, taking ceramics lessons in some lady’s garage, all with a Pepsi–A PEPSI–nearby to quench my thirst.

Could it be that my mother just purchased Pepsi more often than Coke back then? Was Pepsi more readily available than Coke in the south suburbs of Chicago? At some point, I switched to Coke. For some reason, I can’t remember the circumstances surrounding that monumental shift of the tides***.

A few years later than those memories–to be specific, the early 1980’s–I was a huge fan of the Pepsi Challenge. The Pepsi Challenge–probably one of the first major battles in the Cola Wars–was a blind taste test during which Coke and Pepsi would go head to head in the mouths of those willing to make an educated guess about it. Why did I like it? Because I could ALWAYS tell the difference between Pepsi and Coke. (Still can.) I always laughed at the people who took the challenge who claimed to have “no idea that this was Pepsi!” as they grinned into the camera as if they were part of a cheesy sitcom opening sequence. Of course, this being a major advertising campaign, Pepsi hired a major (back then) television star to conduct some commercial Challenges, Gabe Kaplan of “Welcome Back, Kotter.” (I wonder if he called his agent after the first day on set, shrieking into the phone, “Pepsi Challenge? Pepsi Challenge? I thought this was Battle of the Network Stars!! You’re fired!”)

I have personally experienced many Pepsi Challenges in real life. How the heck did that happen, you ask? Have a seat and get a soda (your choice); I’m gonna tell you.

During the 1982 World’s Fair in Knoxville (Holla! to Tara and JCO, my Knoxvegas peeps), Pepsi had representatives there, conducting “The Challenge”. Being a Season Pass holder and frequent visitor (the hotel my Dad managed was within walking distance of the Fair, and we spent all kinds of time there), I knew where to go when I was thirsty…to the Pepsi Challenge! It was there that I was handed two small cups of soda to drink and analyze. I pretended that I was there to do The Challenge for the challenge itself, but actually I was just parched. (Sorry, Pepsi. I was only using you, but you weren’t alone. If I found myself in a thirsty state on the other end of the fairgrounds, I went to the building where the booth promoting unrefrigerated milk—in plain, chocolate, and strawberry!–was, and took advantage of their generosity.)

Apparently, for me, Pepsi = Good Times.

Fast forward again to this weekend when I found that awesomely retro-looking bottle of Pepsi. As I tend to do when I discover something this exciting in my little world, I arrived at home and started thinking that maybe I should have bought more than one.

Then I realized that I was being totally ridiculous. And that this marketing campaign is GENIUS. Why? Because it made me want to spend lots of money on bottles of a product that I wouldn’t normally buy, just because of the cute label. I mean, really, what kind of advertising prodigies came up with something so incredibly brilliant?? Pepsico, you Cheeky Monkeys! I don’t like to spend money frivolously, and investing in a case or two (or three) of retro-packaged cola would be silly.

But I sorta didn’t care.

Good news for me, though; I had conquered the Pepsi Challenge, one last time.

*Drinking more soda than water, milk, or juice is a sad but true factoid about my entire life that I wish had been different.
**In fact, I am 78% sure that these memories ARE actually from my own life and not from commercials.
***Dramatic, No?

Previous post: All Stuck Up And No Where To Go(ggles)