May the Triforce Be With Him!

Years ago, when he was about seven or eight, the older boy used to spend hours (upon hours, upon hours) playing his Game Boy. To say he was obsessed with gaming back then would be a slight understatement. He was convinced that he was going to grow up and “help Nintendo out” by giving them ideas for new games.

In fact, at one point he decided that he didn’t want to wait until he grew up; he crafted a letter to Nintendo USA that detailed his game idea and why they should manufacture it. He received a really nice letter from the company, thanking him for writing but explaining that they don’t use game ideas from people who don’t work for Nintendo. (We still have the letter!)

A side hobby that sprung from his video gaming hobby was drawing. Sort of. He spent hours (upon hours, upon hours) at the computer, using the “Insert shapes” function in Microsoft Word to create pictures of the Triforce from the video game “The Legend of Zelda”. I was lucky enough to find this example to show you; the others are no longer on a computer (they’re on our back-up drive): 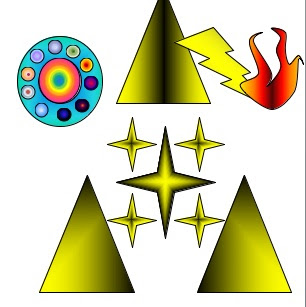 The amount of time he spent on these was ridiculous.

Fast forward to this weekend:

We spent yesterday over the northern border in America’s Dairyland. The older boy had some business to take care of; he was a finalist in a major scholarship program at his first-choice college. He spent the morning writing an essay and then being interviewed in order to compete for one of twenty scholarships ranging from 3/4 tuition all the way up to full tuition AND full room and board. We’ll find out in three weeks if he was among the top twenty; obviously we’re keeping everything crossed right now!

After the luncheon, he had an appointment to get his graphic design portfolio reviewed by a Fine Arts Department professor, in order to be considered for a Communications and Digital Media/Graphic Design scholarship. He has done some really great work in design over the past couple of years, and Julesie, an über-talented graphic designer herself, helped him assemble his portfolio in a way that made sense and prepared him for the interview*.

We are hoping that all those hours he spent making Triforces is going to pay off for him; the professor was very, very complimentary of his mad skillz, and actually asked him if she could take his electronic portfolio (CD) to show her SENIORS. That’s a good sign, don’t you think?

We are super-proud of him no matter what happens**.

*She also suggested that he wear his red and black tie for the interviews, as those are the school colors. It was pure genius. Subliminal suggestions can’t hurt, you know!
**Believe me, if he gets a scholarship, you’ll know, because you’ll probably hear me shrieking from all the way over here!

Next post: All Stuck Up And No Where To Go(ggles)