Just Sit Right Back and You’ll Hear A Tale…

The horror story that I told yesterday was only part of our day on that primitive isle*; we saw so many other amazing things, things we weren’t scared of or slimed by**!

This island truly was the type of place where it wouldn’t have been surprising in the least to see Gilligan swinging in a hammock or the Professor fiddling with that stupid radio. It was deserted, but beyond the beach area and in the midst of all of the trees, there were signs that people had been there: trash in the form of things like tires, containers, metal scraps, and other miscellanea.

We spent some time exploring, and the things we found were very interesting.

We found a pier that was strong enough to withstand a hurricane, though if you look in the distance you can see how it’s twisted. Pretty cool, no? We still carefully walked all the way to the other end! 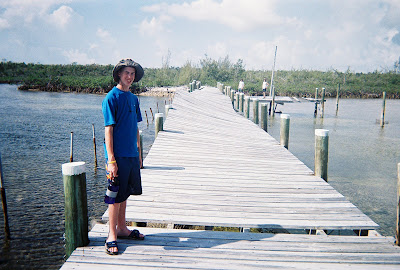 One of the souvenirs that everyone wanted to bring home was a conch shell. We were told that bringing a “perfect” conch shell home is not allowed, but if we happened to find one that had been harvested already, indicated by the shell having an oblong hole in it (made by the fishermen), we could take one of those. This island had many holey conch shells to be found; the fun was in finding one that was just about perfect in every other way. When we were walking around on that twisted pier, we looked into the water at the end of it, and saw a bunch of harvested, empty conch shells sitting underneath, half-covered by the muck in the water. Though he didn’t realize it when he offered to get one for me, one of the boys risked his life to do just that. As he bent down to wiggle the shell lose, we noticed a shark (!!!) swimming around down there. It was a little one, but a shark nonetheless. By the way, I added that shark “sticker” to the picture with the magic of Picnik, because I didn’t have the camera ready at the time the shark swam by. 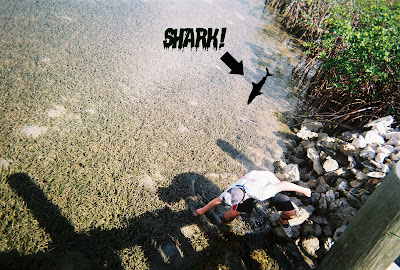 Other than conch shells, the island was full of coconuts. I have never seen so many in my life, and that includes in movies, television, and other people’s vacation pictures. Captain Del told us to gather some up, so we could have a snack. As luck would have it, Captain Del was an old pro when it came to splitting coconuts. He got to work immediately, and Sunny (the Captain’s dog) showed of her extreme intelligence and mad survival skillz by digging herself a perfectly-sized hole in the sand to curl up and stay cool in, on that hot summer day. 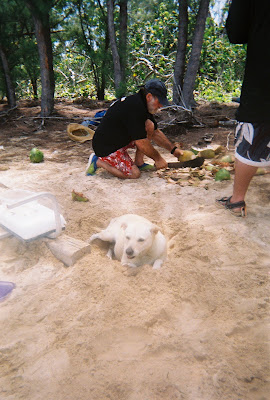 Though I found those particular coconuts disgusting–I prefer what we get in the grocery store!–because the milk was on the thick side and the meat was gelatinous, Sunny LOVED them. 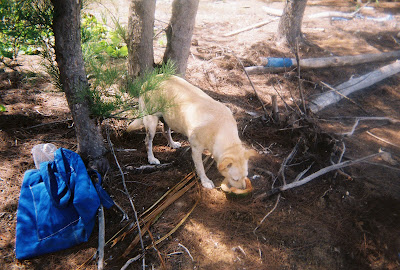 She worked on hers until all of the meat that her snout and teeth could get was gone. 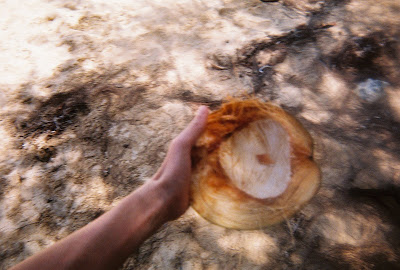 In total, we spent about three hours–a three-hour tour!–on that deserted island. It was a busy three hours, indeed, and in the end, before jumping into the motorboat to head back to the Pecheur, some of the boys had a great time leaving a mark on the island for the next visitors to find. 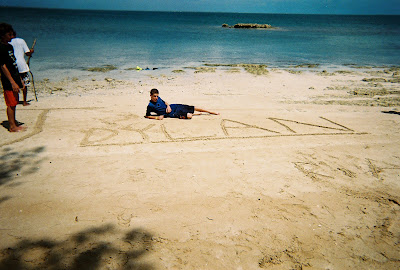 *Yeah, yeah, this post IS part of my “Weather’s Better in the Bahamas” series; I’m just getting tired of putting that information at the top of the post.
**These photos were taken with a disposable camera, because I didn’t want my trusty Olympus to get wet on the motorboat ride over to the island.