It occurred to me with a start last night that twenty years ago today, my beloved beagle (and subject of the book I wrote) Bijoux was born (may her memory be for a blessing). She died in April 2003, and the idea that she’s been gone nearly seven years floors me. She impacted my life in ways that only a true dog lover will ever be able to understand, and as I type this, my eyes are misting over, even after all this time.

I wanted to honor her by re-posting some stories about her from my book blog. I wrote about her entire life from the week she arrived in our home until her death; it was a part of my grieving process. If you are interested in reading more of her stories, I’ve got links to them in the margin at the other blog. This “chapter” of her story is called “The Buddy System Always Works”, and I posted it originally in three parts.

Bijoux became my almost-constant companion. Barring work and school, which were blocks of time completely incompatible with having a puppy partner, she went everywhere with me. I took her in the car as much as possible, not only to keep me company but also to get her used to car travel. A quick trip to the bank? Bijoux learned in a matter of two or three visits that the bank stocked dog treats for canine customers. An afternoon at a friend’s house? Bijoux made her own friends while we were there! A grocery run for some last-minute dinner ingredients? Bijoux was along for the ride then, too, and loved every minute of it. When the boys were born, life got too hectic to bring Bijoux along on car rides as much as she was accustomed. Whenever a new opportunity for an easy errand with her presented itself, I was quick to take advantage of it, especially on cool and breezy spring or fall days.

I cracked open the windows and left Bijoux in the car, saying “See you later, Alligator!” (NOTE: I ONLY left her in the car alone for a few minutes at a time, and NEVER on a hot day.) Very early on, she developed a habit of moving into the driver’s seat when I left her in the car. I always tried to park the car facing the building I was visiting. The very second I climbed out of the car and walked away, she got up from the passenger seat and climbed into the driver’s seat, keeping her eye on the door of the building I entered. There she sat, straight and tall, staring in my direction—I know this because occasionally I was in a position to see her from inside—just waiting for me to reappear.

As I made my way back to the car, Bijoux always spotted me immediately. Although she remained seated while I was still yards away from the car, I could see her peering over the steering wheel with her ears perked up, wagging her tail as soon as I came into view. Her whole upper body moved back and forth ever so slightly as she wagged her tail, celebrating my return. It was only when I opened the car door to get in that she got up and hopped back over to the shotgun seat and settled herself, ready to ride on.

Bijoux was a frequent visitor at the craft store where I worked part-time. The first time I brought her in, holding her in my arms, my co-workers fell in love immediately. (She had that effect on people.) After a couple of weeks I even got permission from the manager to actually put her down on the floor to walk around for a few minutes, but only before the store was open.

It became a ritual to bring Bijoux each time I picked up my paycheck. We would arrive at the store at fifteen minutes before opening time and knock on the glass to gain entry. Once we were inside, I unfastened her leash and, as my co-workers laughed in anticipation, I acted like I was going to scoop her up into my arms. Bijoux took off then, like a maniac, running down the center aisle and stopping just short of the end, skidding around corners. Many times her oversized paws couldn’t stop her soon enough, and she’d end up flopping to the ground and rolling around as she tried quickly to switch directions. She and I ran the aisles for ten minutes at a time, and then, having had enough fun for the time being, left for home.

As most “Dog People” would agree, the idea of constant companionship is something that both canine and master can easily embrace, especially if they feel like they’ve waited a lifetime to be together in the first place. As we grew accustomed to being together for most of the day, it was not long at all before she insisted on nighttime togetherness, as well (or maybe it was me…who knows?). We started out leaving Bijoux’s crate in the kitchen, and that’s where she would sleep at night. From the kitchen, we moved her to the living room, thinking it would be warmer there (as if there was ever a chill problem in our Norfolk, Virginia townhouse!). As the days went on and her nighttime whining continued, I reasoned that she might be comforted being in our room with us. That’s how the crate made its way upstairs to our bedroom. And my first brush with Lesson Number Three—Don’t Start Something You Don’t Want To Finish—was about to take place.

Bijoux was my first “baby”, and as Jim and I spent hours with her whenever we could, she got used to the attention. Eventually she took to following me everywhere, even if I was just getting up to turn on the television. No sooner would my bottom rise up from the couch, she would be up on all fours, ready to accompany me anywhere. Jim just shook his head, telling her, “She’s just going to get a drink, Bijoux…relax!” If I was on my way to the kitchen, she trotted behind me happily, wagging her tail in hopes that I would share my snack with her. If I went upstairs to change my clothes, she hopped up on the bed, lay down, and got comfortable until I was finished and ready to leave the room. When I did, she jumped off the bed and followed me back downstairs.

Even when I just went to use the bathroom and closed the door but didn’t let the lock catch, it was only a matter of seconds before I heard a thump as her nose hit the door to push it open. She peeked her head in only for a moment as if to say, “Are you in here? Okay.” After she was sure of my whereabouts, she backed up and went to lay down wherever she could, all the while keeping the bathroom doorway in her line of sight.

The need Bijoux had to be always by my side even caused leash problems. She gladly trotted beside me when I held the leash. She gladly trotted beside Jim or the kids when they held the leash if I walked with them. The problems began if we were all walking together and I had to leave. Bijoux whined and pulled at the leash, trying to follow me. One day I took her with me to pick the boys up at school. Needing to talk to one of the teachers, I gave the leash to the older boy, then about ten years old, and told him to take Bijoux home because I’d be more than a minute. When I turned around a couple of minutes later, he was still there, struggling to make her turn around and go home with him, all the while her eyes were locked on me and her four feet were planted firmly where she stood. She wasn’t going anywhere without me.

At night, she jumped into bed with me and made herself right at home. Typically, Jim was still brushing his teeth when Bijoux and I snuggled in. We had a little game that we played, a game that never got old. To us. To Jim? He found it funny only once or twice. When Bijoux hopped up onto the bed, she laid down on Jim’s side of the bed, even placing her head on the pillow. I covered her up to her neck and there we stayed, just waiting for Jim to come into the room. As he appeared in the room, Bijoux kept her body completely still—except for her eyes. Her eyes followed him around the room as he put his pajamas on, checked his closet for tomorrow’s clothes, and generally finished up for the evening. Jim made eye contact with her as he walked around to his side of the bed and stood next to her waiting for her to move. And she waited for him to leave! She didn’t move a muscle until he said, “Move your ass, Bijoux!” If she was being particularly stubborn, he also gave her a little whack on the bottom. She clumsily got up and lumbered around the bed like a big ox, finally plopping down next to me, her body curled up against mine. As the night went on, she tunneled under the covers and usually ended up in a big ball, right between my knees. Worse, if it was summer, she ended up in a big ball on the outside of the covers, right between my knees. Jim thought I was crazy for not kicking her out, and I spent many nights sleeping badly because of her, but for some reason I didn’t care enough to make her leave.

Although she followed me so closely (especially in the kitchen) that I tripped over her on a constant basis, her perpetual presence was one of the hardest things to get over after her death. Sometimes I still feel like she’s right behind me and I turn around, expecting to see her there. 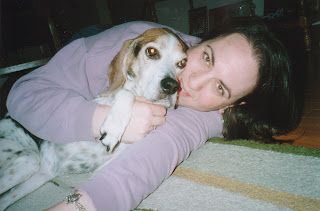