My second grade religious school class was working on a project for an upcoming all-school event called “Torah Day”. We were asked to make puppets of some sort that portray different people from our bible stories (Old Testament). My co-teacher and I decided, due to the age and wide range of motor skills in our 19 students, to do some simple paper-on-a-stick puppets. We started with a simple “gingerbread man shape” on white paper, and then glued them onto a colored background before putting the popsicle stick on the back.

As you might expect, some of my seven-to-eight year olds did some quick scribbling and then decided they were finished, and some of them really, really put their best into it, both effort- and creativity-wise.

For example, here’s one boy’s interpretation of Abraham: 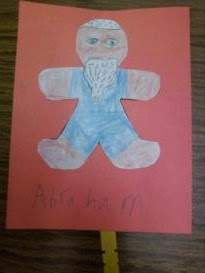 Here’s Jacob, who was, obviously, one of the first men on earth to have a white-collar job: 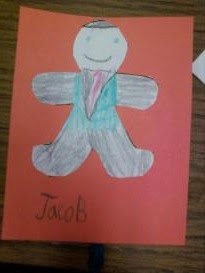 One boy came up to me and handed me his “finished” project; he basically just drew facial features, hair, and a beard on his gingerbread man, but left him completely naked.

Mistaking him for one of the kids who wanted to scribble and then be finished, I said, “Oh no, come on, he’s got to have clothes. This is for ‘Torah Day’!”

I suggested that he adorn Adam with a leaf, at least: 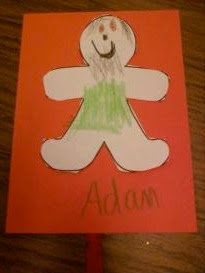 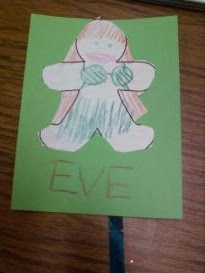