The great thing about life is that strange and wonderful opportunities have a way of presenting themselves when you least expect them, and if you choose to take advantage at the time, you can find yourself experiencing really awesome things, even if it’s only for posterity.

When D was in fourth grade, he became involved in the school play. A fourth grade teacher (not his) headed up the production each year and, for an elementary school, it was always quite elaborate. That year, the kids were putting on a play called “The Elephant’s Child”, by Rudyard Kipling. He signed up to stay after school for practice several days per week, and shortly after things started percolating there, he came home with the news that He! Got! A! Part!

My boy? Would be the Kolokolo Bird.

It was a small part, but nonetheless, he possesses my tendency to “Go Big or Go Home”. He practiced his two lines all the time, whenever he could. One of the lines was even a bit of a tongue-twister:

“Go to the banks of the great grey-green, greasy Limpopo River, all set about with fever-trees, and find out.”

Now, a one-word line may not seem like it would be that difficult, but the delivery was very important and took lots of practices and do-overs. I wish I had the sound to go with this photo of him reenacting his favorite line (of the two!): 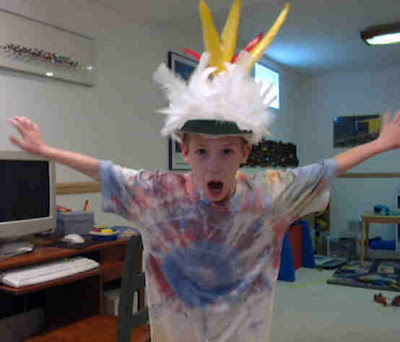 He was adorable. And I’m not just saying that because I’m his mother. In fact, he stole the scene with his cute bird hat, his spectacular tie-dyed shirt and that one glorious line, and became a legend in his own time at that school; he was commended for the spectacular job he did for the next year and a half, until he moved on to the next school on his journey.

He made a pretty decent impact on some of the teachers, and that opened up a once-in-a-lifetime chance for him the following year…

…which you can read about here.

Previous post: So I Received This E-mail From Haiti…