If you watched the Suburban WoW livestream yesterday, you know that Weaselmomma and I were headed over to our local Heartland Blood Center right afterwards, to donate blood. We were accompanied by the always hilarious and very excitable Manic Mommy, who was there to take pictures. Why pictures, you ask? Well, of course, for Manic Mommy’s Third Annual Virtual Blood Drive! You can get the scoop by clicking here, and you have until the end of February to donate blood and e-mail Manic a photo of yourself while you’re donating in order to be eligible for the prizes, which include a free ticket from Southwest Airlines!

This is the third year of my participation in Manic’s blood drive (read about my adventure last year HERE and the year before HERE), and Weaselmomma’s second. (I think Weaselmomma actually took Manic up on a dare last year.) We thought it would be “fun” to donate at the same time, and turn that blood center into a party room too.

We totally did. First of all, the ladies that work there are SO friendly and so nice. Well, mostly. There was ONE issue, but due to my forgiving nature, I’m willing to look over the fact that, when we walked in and took our paperwork to fill out, it seemed as though they thought Weaselmomma and I were “together”. You know, like a couple. It was just for a second though, and I still don’t know how that happened. We weren’t holding hands, we didn’t complete each other’s sentences, we didn’t gaze adoringly at each other, and I didn’t touch her (and vice versa). In fact, though we had appointments at the same time, we didn’t even walk into the building together. Manic has some funny video of us filling out the forms during the time when we discovered that the ladies were quite possibly misrepresenting our relationship, and I will kill her if she posts it she might end up posting it on her blog.

After we went through the screening process to make sure that we hadn’t exposed ourselves to all kinds of things that recipients of our blood wouldn’t want in their system, we took our places in the customized donation chairs, and then Weaselmomma threw down the gauntlet. After claiming that she (not in these exact words) bleeds like a Mother——, she said, “Hey, we should RACE!”

And then it was on. Naturally I had Manic’s support, being a third-time participant and her “sometime stalker” and all. 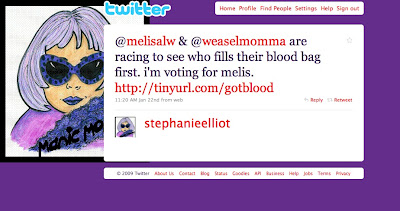 In case you were wondering how we were timed and if they started us at exactly the same time, there is a timer on the machine thingy, so although my blood started flowing first, we were still able to race with the stats that the machines provided.

For the record, Weaselmomma was trashtalking the entire time, saying things like, “Yeah, I bleed fast. I mean, I’m in trouble if someone cuts me, because I’m just dead.” I think I also heard her say, “You and your slow-moving blood can SUCK IT.”

In the end, it’s not really important who wins, right? I mean, since we were giving a donation and saving a total of six lives and all.

JUST KIDDING. I’m woman enough to admit that although Weaselmomma won with her break-neck speed of 4:53 for a pint bag of blood, I came in a close second (out of 2) with a creepily close 4:59.

It was way more fun than, say, racing each other in a 5K. And we got sugary snacks afterwards.

Please consider participating! You can save THREE LIVES by donating a pint of blood, and it doesn’t take that long. By the way, if you can’t give blood for any reason, you can donate a prize to Manic’s blood drive! Any takers? Let me know!

Next post: So I Received This E-mail From Haiti…

Previous post: Here’s A Post That, in the End, Actually Has Nothing To Do With This Adorable Photo of Me at the Age of Fourteen, Except For One Little Thing.