My friend Mocha Dad recently wrote about how his dog, Ginger, ran away (she was found and came home later, thank goodness!). Had he not titled the post “The Case of the Runaway Beagle” (okay, and had I not known already that he had a beagle at home), I could have guessed the breed just by reading the story. Beagles are notorious for being able to slip out unnoticed and take off, tracking whatever attractive scent that gets up in their nasal cavity.

I didn’t think about all of that when I made the purchase. A couple of days later, the four of us took our puppy for a walk around the neighborhood. We had been walking all of three minutes (and even that is an exaggeration) when Roxie suddenly caught a scent and yanked. It only took that one time to yank the anchor end of the leash out of the plastic casing, and she was off! We all took off running after her, but if you’ve ever tried to corral a beagle who means business, you know that you’ll be outrun every time. Luckily for us, she ran into an open garage at the end of our street, but not before crossing three streets to get there, giving me three mini-heartattacks. The retractable leash went into the trash and I made a beeline for the nearest pet supply store to buy a “real” retractable leash for her. Just to be safe, I bought the one rated for large dogs rather than medium, and we still use that leash today.

The second time she got away from us, she was nearly a year old and still small. She shimmied under the backyard gate to gain her freedom. When one of the boys went out back to let her back in the house, she wasn’t within the friendly confines of the yard. We were extremely lucky that OUR garage happened to be open that day, because she caught the scent of her food–which we keep out there–and ran from the backyard right into the garage, where we found her happily binging on Nutro Max puppy food.

The third time she got away was the worst. She was about 2 1/2 years old. I had a few errands to run and then a spin class to teach that evening, and had let her out in the backyard to, you know, do what she needed to do before I left. When I went to call her in, she wasn’t there…and the gate was WIDE OPEN. A utility person had been in my backyard earlier that day, and didn’t close the gate when she left.

SERIOUSLY, IF YOU PERFORM A JOB THAT REQUIRES YOU TO GO TO PEOPLE’S HOMES, PLEASE PUT THINGS BACK THE WAY THEY WERE WHEN YOU ARRIVED!!!

My dog was gone, and the anxiety attack began. I ran out front, calling her name. Our garage was closed, unfortunately, so she wouldn’t have been lured by her food. There was no sign of her. I yelled for the kids to come outside and help me look, and while they ran around in our area on our street, I jumped in my car to drive around the neighborhood, whistling out the window and calling her name.

I was sobbing as I drove around the streets of my neighborhood, not seeing her anywhere. Finally, I told myself that I had to listen to the experts who say that most dogs will return home after running away. I drove home, called the kids in, and made a few calls to friends in the neighborhood to ask them to keep an eye out for her. As I tried to keep my mind off the fact that my neighborhood is bordered on the east by one of the busiest streets in my town, I kept my fingers crossed that someone would find her and call the phone number on her tag.

After a seemingly endless half hour of hand-wringing, the phone rang. The caller i.d. registered the name of an apartment complex that is on the other side of the golf course in my neighborhood. I answered the phone with, “Please tell me you have my dog!”

The gentleman said he did indeed have my dog, and he was holding her at the apartment office. I grabbed her leash and rushed over as quickly as I could, excited for our reunion. I rushed into the office to see the maintenance man and two of the ladies who work in the office smothering Roxie with kisses and sweet-talk. I said, “Roxie! Come here, girl!”

She sat there and just looked at me.

The maintenance man said, “I was outside and saw her running down the fairway, and knew that someone was probably looking for her.”

The mental picture of Roxie running down the length of the fairway, her big, floppy beagle ears flapping in the wind like sails as she rejoiced in her newfound–albeit temporary–freedom, completely cracked me up. As I walked towards her, she still didn’t move. She was basking in the glorious treatment she was getting from these strangers, her new best friends.

Really? After all I had been through, my dog wasn’t even going to give me the pleasure of feeling like she was happy to see me? (She’s very much like Charlie Brown’s Snoopy when it comes to this kind of thing.)

I had to practically drag her out of that office. After I profusely thanked the people there for grabbing her and calling me, they called out after us as we exited the building, “Hey Roxie, come back and see us anytime!”

The next day, I bought locks for our gates, to ensure that nobody can come or go from our backyard–Roxie included–without our assistance.

Sometimes I wonder about what Roxie would do now, at the age of almost six, if the gate were left open. Would she remember her 45 minutes of freedom on that glorious summer day? Would she remember the wind under her ears, the smell of something really awesome in her nose, the feeling of the pristine golf course grass under her paws?

Would she run again?

Yes. Yes, I think she would. 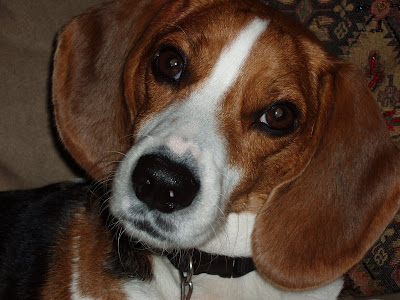 And so, the gates stay locked.

Previous post: Well, There IS That Zipper And All…