Note To @Zoeyjane: I’ve Finally Made It!

There is always much ado about Mommy Bloggers and their propensity to discuss the details of every bowel movement belonging to or coming out of their children.

As the mother of two teen boys, I have never dabbled in discussing the topic of poop because they were teens when I started blogging and…frankly, YUCK. Also, might I state the obvious by saying that not only do my boys never discuss their bathroom habits with me, but I don’t want to know AND wouldn’t share that with the internet public.

And then, the other day, I found out that by having teen boys who–probably–do poop (everyone does, you know) and are way too old for me to even consider discussing it here (and who would want me to???), well, I might be missing out on way more readers than I currently have. (Okay, I’m totally kidding. I can’t even type that with a straight face.)

A wise woman named Zoeyjane sent out a tweet which included the secret to being a success as a mommy blogger: 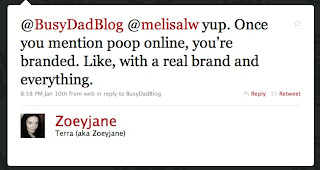 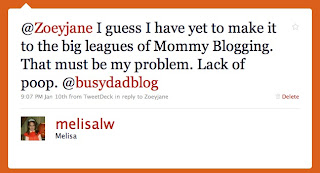 Well, I am happy to report that I have something to report. And it’s a win-win for everyone involved. I’m going to mention poop, and that poop doesn’t belong to my own kids.

Here is an e-mail exchange that occurred yesterday between me, Kate, and her hubby. The baby (I’ve been calling him “Squeaks”), as of this afternoon, had not pooped in about 36 hours yet had sucked down about a million gallons of formula. We were all waiting for him to blow because, well, need I explain? Anyway, the e-mails:

Me: (3:10 p.m.): We have poop. Squeaks’ butt finally exploded and filled an entire diaper. I waited a few minutes to make sure he was done…When I was cleaning him up he started going again so I had to stick another diaper on him until he was really done. 🙂

So there you have it. I not only mentioned poop, but crafted a fine post around it that also did not embarrass my OWN kids one bit. I hope Google can handle all of the new subscribers that are rushing to add Suburban Scrawl to their readers!!!