Here’s A Post That, in the End, Actually Has Nothing To Do With This Adorable Photo of Me at the Age of Fourteen, Except For One Little Thing.

I have a few favorite pictures of myself over the span of my forty-one many years on this earth. This is one of them: 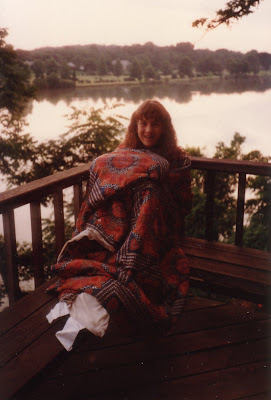 I can tell you a few things about it. I was fourteen. I was wearing pajamas, because I was at a sleepover. One of the other girls took the picture shortly after the sun came up. I was exhausted, because we were up most of the night. And that blanket? It had snaps. It was sort of like a Snuggie without the arms, yet way more complex. (I was not using it how it was intended in the photo; don’t try to analyze.) The girls I was with were part of my CISV Interchange Group; we hosted German kids for one month in the summer of 1982, and the following summer we went to Germany for a month. This picture was taken in Maryville, Tennessee, at Minky’s house.

First, finding this picture and remembering where I was at the time reminds me that Minky went to the same school as John Cave Osborne*, and he might have known her. I found out a couple of months ago that John is from Knoxville and knows a few of the people that I knew well, as in my eighth grade boyfriend. So, he probably knew Minky. I’ll have to ask him.

Anyway, the thought of Minky reminds me of the 80’s revival of the Preppy trend. We were in the thick of it when that picture was taken, and I thought it was great. The fabulous thing about it was that you didn’t have to be a preparatory school attendee who played golf at the country club on the weekends to be a part of it. All you had to do was toss on a pink IZOD shirt, hang a monogrammed sweater over your shoulders, sport matching (perhaps pastel green, blue, and pink?) plaid shorts, put on a pair of sparkling white tennis shoes, and you were instantly a Preppy.

WHY would one want to be a Preppy? Who knows. We didn’t need a reason, youngun. It was just a style. Full disclosure: I was not all in** on the Preppy thing. I didn’t dress like that on a daily basis, though the purse that I carried at the time was one of those wooden handled things with the buttons and the interchangeable covers, and I totally admit to owning (and wearing) penny loafers. I also owned both The Official Preppy Handbook by Lisa Birnbach AND a puzzle called “How To Look Like a Preppy”, of which I actually possess a photo, but I’m too lazy to go into the closet and get it, scan it, and post it here so you’ll just have to believe me. I thought, at the time, it would be really cool to be a real Preppy. But there was one thing I didn’t have that would prevent that from happening, without a doubt:

Or Minky. Which brings me full circle.

In the end, since I was just a poser, I went on to other trends like that whole rainbow craze, and eventually grew into the style I embody today, which is very little. Style, that is.

*Did you know that we have a Knoxville Crew within our little group? John, Tara and I all went to high school (different ones) in Knoxville, just a couple of years apart. Of course, my school was the best out of the three. Sorry, you two!
**I also, on occasion, wore neon-colored duds, which was another 80’s trend altogether.

Previous post: I Hope He Gets His E-mail on a Blackberry or Something…