Dinner With A Five Year Old 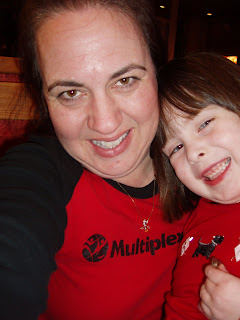 I took Bean to dinner at Red Robin last night, and although I had an extremely awesome list of interview questions for her to answer while we ate, the freestyle conversation was, as you might expect, way better.

First of all, I have to tell you that Bean brought a weighted clip to Red Robin, so that when she got balloons from the hostess they wouldn’t make their way up to the ceiling, out of our reach. Is that preparation, or what???

We asked for her balloons on the way to the table (she wanted one for herself and one for her baby brother), promptly ordered our hamburgers and fries, and then the varied conversation began.

“Baby dogs are called pups, Melisa. I am not going to get One. Single. Dog. because I have three cats and the cats won’t get along with a dog.”

“That’s right,” I said. “And anyway, dogs poop in the backyard. Do you know whose job it is to clean up the dog poop?”

“What??? Are you telling me that boys like poop?”

I asked her how old she needs to be before she will be able to drive.

“Right. I don’t wanna drive. My Daddy and Mommy are going to just drive me.”

“Yes. When Daddy and Mommy are a Grandpa and Grandma, they will still drive me.”

“Don’t you think they’re going to have other things to do by then? And what about your husband, anyway?”

“No, they are going to drive me AND my husband.”

(After asking me a question about something having to do with my kids) “How do you know that?”

“Do you know EVERYTHING, Melisa?”

About halfway through our dinner, Rick Astley (you know the song) came on in the restaurant. Bean looked at me, put her burger down, and started moving her head to the beat. I decided it was a good time for a dance break, so I put my burger down too and we boogied in our chairs until the song was over, when we put the serious faces back on and resumed eating.

Bean, on the endless joy of balloons:

“Melisa! You should take two balloons home for your boys!”

“First of all, the helium in them won’t last until I get home. Also, they’re big now, and don’t really enjoy balloons like they did when they were your age.”

“Yeah, well when I’m a kid AND a mom, I’m still gonna like balloons.”

Bean, on her career aspirations:

“What do you think you’re going to do for a job when you grow up, Bean?”

(after thinking for a minute) “I am going to make sure my Daddy and Mommy do the right things.”

“I’m going to make sure they do the right things, and if they don’t, I’m gonna put them in time out. That’s what they do to ME.”

Before I knew it, we were finished eating and I located a few quarters in my purse so Bean could play some games. After watching her play a car race game, I’m thinking that it’s probably a good idea for her mom and dad to drive her around indefinitely.

Next post: Note To @Zoeyjane: I’ve Finally Made It!