I am always dazzled by the writings of Stephanie Nielsen, better known as Nie Nie of “NieNie Dialogues”. If you don’t currently read her blog, you should, if you’re into being moved and inspired. Not only is her personal story as a whole (plane crash survival: and currently thriving) very, very inspiring, but her posts–which usually say so much in very few words–are gorgeous. Some of my favorite posts are the ones that ooze her love for her husband, Mr. Nielsen.

Anyhoo, I liked and related to a recent post so much that I shared it in my reader*, and have thought about it often. It started out with a picture of Mr. Nielsen shoveling snow. (Check it out here if you want!)

Yesterday, the sight of my own fabulous husband shoveling out front made me smile from the inside out. 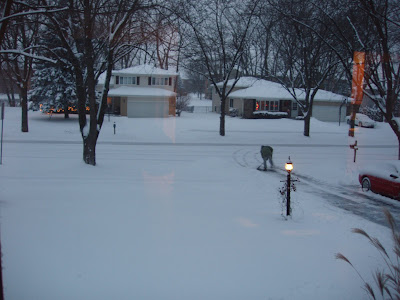 After all these years, I still look at him and seriously think to myself, “He is SO cute!” (Ask my friend Dawn: she’ll vouch.) I am so lucky to be married to this wonderful guy, and while you might think that we have been fighting or that some other circumstance is making me want to write a post of this nature, you can rest assured that I am merely counting my blessings for no other reason than just being thankful, and all is just wonderful on the homefront**.

One of the best things about being with someone for so long (more than half my life at this point!) is that there is comfort in certain little moments because they are so predictable. One of those moments for me involves winter.

The mass quantities of snow which just dumped itself all over the Midwest might have made thousands of children completely giddy, but Jim is not a fan. In fact, once we hit Daylight Savings Time and the sun started setting by 4:30 in the afternoon, he had already expressed his displeasure with the weather here countless times, to anyone who happened to be within earshot. Don’t get me wrong; it’s not like he turns into Dana Carvey’s “Grumpy Old Man” from Saturday Night Live. Rather, he just makes comments like “I hate winter”, “This snow sucks”, or, my favorite, “You know I ONLY live here because of you, right?”

And I also know that someday–SOMEDAY–we will move to a warmer climate, “for him”, and he will be Thrilled with a capital T.

Winters in Chicago are only the tip of the iceberg (so to speak) when it comes to what he puts up with, for me. Other things include:

~my extreme attention to detail, which can be really, really annoying to others around me
~my ability to go from “calm” to “freak-out city” in five seconds or less
~my hesitancy to say “no” when asked by others to take on new tasks, and in turn, my tendency to neglect to ask for help on those tasks when I need it
~my stubbornness in most things

I could go on, but considering this is my blog, I think I’ll stop. My point has been made. I have a great husband who puts up with many distasteful things to be with me, not the least of which is the annual five-month winters we have here in Chicago.

It gets even better than that. When we woke up to all that snow yesterday, he told me in no uncertain terms that I would not be helping him and the boys shovel, because I still have a terrible cough (longest cough span ever: so annoying) and he didn’t want me outside in the cold and snow. Usually, I’m out there. I actually don’t mind shoveling. Yesterday, however, I had a change in my normal job position and was the designated coffee- and cocoa-provider for the troops. He issued this order with complete seriousness while being tender at the same time. (I believe his exact words were, “If you show up outside, we will fight.”) He was taking good care of me, as always.

And then it kept snowing, about another five inches. He went out to shovel again, this time alone because one boy was getting ready for work and one boy was taking a snooze. I was certain that he would re-enter the house scowling and carrying on with the Complaint Trifecta about how he’s only here for me, he hates the winter, and snow sucks.

But he didn’t. He took off his winter gear and sat down in his chair smiling, telling me a funny story about our stupid neighbor. And in that moment, though I’ve been practically hacking up a lung all week and we’ve both lost sleep because of it, and though we’ve been busy “doing our own thing” around the house on our days off this week (mostly because of my cold), and though we hardly get any alone time lately because we have two teenagers, I smiled, because this is life, and I get to spend it with him.

And you’d better believe that someday–SOMEDAY–when we move to a warmer climate, I will be positively giddy the first time my hair is flat against my head from my being so hot and I’m sweating like a pig and I’m feeling all wilted and puny, because I’ll get to complain that I only live there “for him”, knowing that it’s just life and really, I don’t care where I live as long as I’m by his side.

*By the way, did you ever notice that I have a little box right over there in the right margin in which you can see the various blog posts, shared from my reader, that I highly recommend? I add to it all the time…I bet some of yours are even in there somewhere!