The Queen of Talk

I recently found a newspaper article about an old friend of twenty years ago who I haven’t been in touch with for years. I’m sure you’ve heard of her; her name is Weaselmomma. We had some good times back then, wearing tiaras to the grocery store, eating cookie dough, enjoying countless wings at BWW, and sharing stories about our kids. We even did a little livestream show together. Livestream. On the COMPUTER. Remember that? So antiquated from what we do today, with the brain-injecting, virtual reality-style entertainment that is so hot right now. Sometimes I laugh when I think about how we used to actually have to beg for viewers…and now? If we were still doing that show, no begging would be necessary. We could just pick out our ideal audience using the Zapzoo3000 and send the injections through the transoptic fleebershooey.

Anyway, it was a shame when we had to discontinue that show. She just got too big for it, that’s all. I remember the exact day when it started to go south; Thursday, November 20, twenty years ago. She chatted with Greta Van Susteren on Fox News (before it was bought out by Sir Perez Hilton) for a few minutes, and the rest is history. The calls started coming fast and furious, first from Amway and then from the Green Bay Packers. Then Sarah Palin started calling to harass her in the middle of the night. Once she finally got it through to Sarah that she had bigger fish to fry, she got herself an agent, with Greta’s help. It wasn’t too long after that when it became international news that Oprah Winfrey was planning to leave her show in 2011, and Weaselmomma went bonkers. Her obsession with taking our show to the big time took over her life. She spent every waking moment promotingpromotingpromoting. It was an exciting time.

One day, she told me that her agent wanted to cut me out of the picture. I was highly insulted, until I found out that Weaselmomma told her agent that she would only leave me out if she could secure a ten-book deal for me, and the whole arrangement had to be acceptable to me, because that’s how she rolls. Well, I took that ten-book deal faster than you can say “Holla!”, and she went on her own, promising to keep in touch.

In 2013, she became the new Chicago Queen of Talk, both because her show was, from the beginning, “tres muy” (as she says) successful and also because she never let anyone get a word in edgewise. The show started out with a super-low budget, because they wanted her to prove that her show would have better staying power than the likes of Alan Thicke, Tony Danza, Chevy Chase, Bonnie Hunt, and those other celebs who were canned after a season or two. The producers even had to shorten her name a little bit to fit the preexisting signage. Though “Weaselmom” wasn’t quite as cute or catchy, she had no choice but to go with it. Here are a couple of her first promos; you’ll note that the advertising budget was mere pennies.

One of the things I always loved about the show is how she never wanted to come up with her own catchphrase, instead recycling classics from the 1970’s and 1980’s like “Dy-no-MITE!”, “Whatchu talkin’ bout, Willis?”, “Kiss mah grits!”, and “Up your nose with a rubber hose!” It gave the show such a charming feel. I heard that Oprah herself even tried calling in order to be a part of the live studio audience, but that darned ticket line just kept giving her the busy signal. Last I heard, Oprah was crying herself to sleep, saying “Whyyyy? Whyyyy? Whyyyy did I give up that show? I miss it!!!”

She’s been a huge success for the past sixteen years, and I’m so happy for her. In fact, the newspaper article I read? It’s about the renovation and the rededication of a statue in her old hometown, and I think I’m gonna fly (out) now for the ceremony. 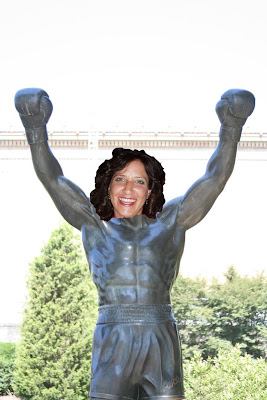 Happy Birthday, Weaselmomma! (two days early!) I’m sorry I totally lied to you about shooting a commercial for Suburban WoW so you’d give me some great sound bites. On second thought, I’m really not sorry because it turned out (as you’d say) “Flippin hilarious!”

Note: What you have just read is part of the second four-way blunk. To read the other three parts, visit Momo, Michaelsdaddy, and Nukedad! In case you’re wondering, “blunked” is a word I actually got into the Urban Dictionary earlier this year, during the first ever four-way blunk, of our buddy Nukedad. If you missed it, you can read my entry and get links to the other three by clicking here.

I also want to mention, by the way, that in preparing for this blunking I spoke with Eldest Weasel and asked her if she could locate any old photos of her Momma that I could put on the internet without getting her face ripped off for giving them to me. Eldest said she had a great picture of Weaselmomma in a belly dancer Halloween costume but it was not digital, so she took a picture of the picture with her cell phone and tried many times over a 30-minute period to picture text it to me, to no avail. When I arrived in Weaselville on Wednesday evening for our livestream show, Eldest managed to sneak the photo to me like a pro. I appreciated her effort SO much; it not only proved that she is a stellar teenager, but also that she is totally fine with someone humiliating her mother. It is quite an awesome photo, but I was iffy about putting it up. You’re welcome, Weaselmomma. That’s my other gift to you. But I’m still scanning it so I can sell it to People magazine when you’re famous.