Look At His Gorgeous Chompers!

Yesterday was a huge day for the older boy. After three years of wearing braces (plus the one year before that, during which he wore a mouth expander), he got everything removed. It was pretty exciting, and he looks fabulous! (Believe me, after what Jim and I spent on orthodontics, there would have been hell to pay if the result was any different!) 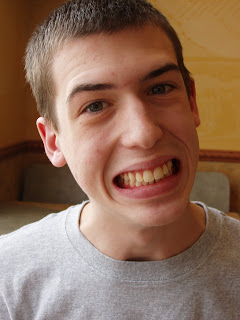 In honor of the occasion, I put together a huge bag of his favorite chewy candies (Mary Janes–blech!– and Milk Duds–yum!), along with gum drops, Hot Tamales, and Dots. It totally slipped my mind to buy him bubble gum, but he informed me that he picked some up on Monday and it’s been sitting in his car waiting for this monumental occasion. 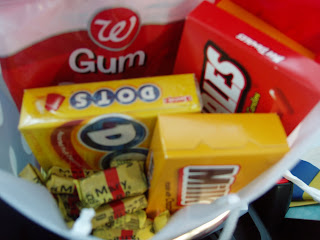 He was giddy when I gave him his loot… 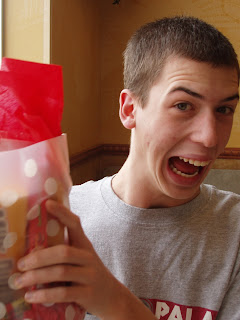 …even after I told him the rules:

1. He can’t eat all that candy in one day.
2. He has to store it in the kitchen pantry, and not to worry: his brother has braces and won’t be eating any of it.
3. He has to brush his teeth more often after eating this candy.
4. He has to give me a Milk Dud or two whenever I ask for them.

Other, non-candy-related rules he got today?

We’re ALL smiling in this house, that’s for sure!

Next post: Let’s Take A Field Trip (or Two), Shall We?

Previous post: The Time I Saw Red: A Cautionary Tale