Many of you have followed our son’s journey to Eagle Scout, including the details of his Eagle project, which was the landscaping in the front yard of our temple. You know he finally officially earned the rank of Eagle on August 12th. That’s actually when the celebration begins. We had to plan his Court of Honor, the ceremony during which he is presented with his badge, awards, certificates and other goodies, and where he can be recognized personally by friends and family.

After a couple of months full of preparations like invitations, letters to dignitaries, script-preparing, and of course, a special scrapbook, the festivities took place yesterday at our temple, the site of his project. It was such a special day, I can’t even tell you. Both sets of grandparents came into town for a quickie weekend, and altogether approximately 150 folks (friends, family, scout people, temple people…) showed up to honor our son. It was totally amazing. It would take me forever to go over the whole thing and I would risk losing you to boredom at my extreme pride, so I’ll just share some of my favorite pictures and tell you a little bit about the day.

The ceremony included the presentation of flags, like any Boy Scout occasion would. The emcee was James, a good friend and troopmate of the 17-year-old’s. James was the only other boy who joined the troop at the same time as our guy and they’ve shared lots of experiences together.

Two of his troopmates did a candlelighting ceremony that is common at the Eagle Courts in our troop: it’s a reading of John Wayne’s interpretation of the Scout Law, and a pretty good one at that. Check it out here.

There were three speakers, two of whom were especially asked to speak by our son. The first one was one of our assistant Scoutmasters, and a friend of the family. He and his son went on the high adventure trip to the Bahamas with me and my son, as well as to Philmont Scout Ranch this year with Jim and both of our boys. He gave a really great speech including some funny anecdotes about the 17-year-old.

The second person to speak was the 17-year-old’s first scoutmaster AND his Eagle project mentor. He’s spoken at many of these Courts of Honor and was as entertaining as he usually is.

The third person wasn’t asked to speak by the boy; rather HE told THE BOY he would be speaking: it was Jim. He’s been working on his speech for months now and was really stressed out at the idea of bawling before he was finished giving it. He did a great job and left everybody reaching for the Kleenex. In fact, you can read his speech here, on his blog! (Leave him a comment when you go there, if you can. He enjoys comments too, you know!) I’d post a picture of him speaking, but all three of them make him look a little goofy so you’ll have to use your imagination.

A highlight of an Eagle Court is always when the emcee calls up any Eagle Scouts who are present to come up and renew their Eagle vow along with the new Eagle. We were thrilled to count about fifteen of them, including recent troopmates, my friend Dawn‘s husband and son, an assistant scoutmaster, and a friend of mine from the gym. Seeing them as a group was really cool. 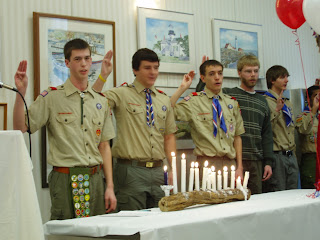 Jim and I put on his medal and his new Eagle neckerchief, and he presented us with the Mother’s Pin and the Dad’s Tie Tack. 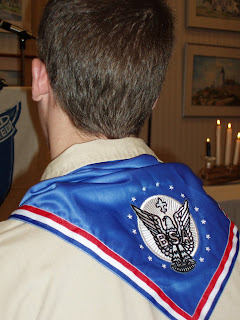 Another really fantastic thing that happened was the presentation of letters from dignitaries. The troop sends off a bunch of standard requests on behalf of the Eagle Scout, and I also worked very hard for two weeks to track down some famous folks’ agents and PR reps in order to send some requests of my own to specific people who the 17-year-old would love to hear from. Only one came in on time for the ceremony, a letter from the president of Nintendo USA. The other letter requests I sent (from people such as Dave Grohl, Steve Carell, Stephen Colbert, the editor of Popular Science magazine, Adam and Jamie from “Mythbusters”, and Mike Rowe from “Dirty Jobs”) are still out there in midair somewhere, and we may or may not hear from them at some point. The troop had better luck with their usual requests: he got congratulatory letters from President and Michelle Obama, President Jimmy Carter, President H.W. and Barbara Bush, Governor Arnold Schwarzenegger, Governor Pat Quinn (Illinois), John Glenn, and several others. State Rep Judy Biggert also had an American flag flown over the Capitol Building in Washington, D.C. in his honor, and it was all presented to him yesterday.

After that excitement, he got to do his own speech. 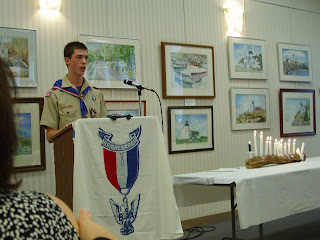 I love this picture (courtesy of Julesie, who had the “pleasure” of using my craptastic*, pink-ducttaped camera since she forgot her camera!). Of course, that’s Jim and me in the foreground, watching him speak. But you knew that. 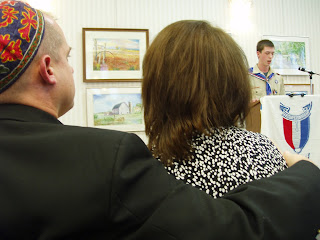 After his speech, he awarded two Mentor pins. As you can probably tell from their name, the Mentor pins are presented to a person or two who the Eagle considers to have been integral to his Eagle journey. He awarded the first pin to Mr. H, his first Scoutmaster and his Eagle project mentor. The second pin? He awarded to his dad. (I knew about it but didn’t spill the secret to Jim ahead of time) It was a great moment. 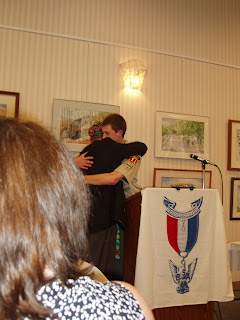 One of my favorite photos didn’t come out of a camera belonging to anyone in my family. It was taken by the mom of two young boys that the 17-year-old babysits. She brought her older son, who I believe is six, to the Court of Honor. He is a new Tiger Cub Scout, and insisted upon wearing his uniform. He and his younger brother love my kid, and he thought it was very cool that the President and an astronaut sent letters. His mom told me that my kid has no idea of the reach of his influence, as evidenced by this adorable photo, which I am posting with her permission. I dare you to try and NOT smile from ear to ear when you look at it. 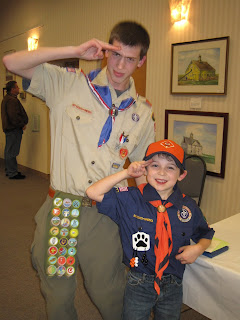 At home, we had some people over for dinner and he opened some lovely gifts including money (which always makes a teenager happy), some great books about leadership and other topics, a watch, and a GORGEOUS scout quilt that my aunt made for him. Once the house cleared out, we collapsed into bed, and we’re still recovering.

It was a proud, proud day, to say the least, and the memories will last a lifetime!

*Craptastic or not, it still takes great photos! Thanks, Olympus!