C Is For Super Funny

I’m taking a break from getting ready for this Sunday’s Eagle Scout Court of Honor (made GREAT progress on the scrapbook last night: Woo!) to report that, for the first time since before Halloween, we brought home a box of sugar cereal from the store, at the younger boy’s request.

And you know what that means…

The younger boy went first, and once we stopped laughing, we wondered just how he’s gone as far as he has in his education, since he obviously hasn’t mastered the alphabet: 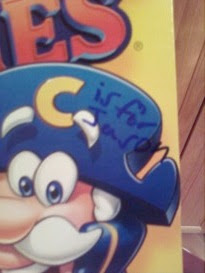 He continued to tag the box like a professional graffiti artist, claiming that the cereal is “Not Father’s” (as in Jim, not as in a priest) and that the “me” in “Crunchetize me, Cap’n!” definitely means him, the younger boy. 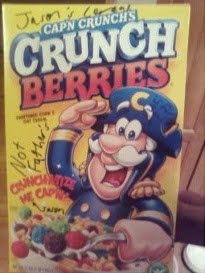 After marking his territory, he went upstairs to study for finals and then Jim stepped in. First he tagged the top of the box, which the younger boy had neglected to mark up. 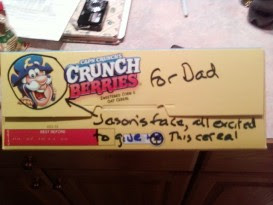 Then he changed all of the younger boy’s markings to indicate that the cereal is, you guessed it, his. 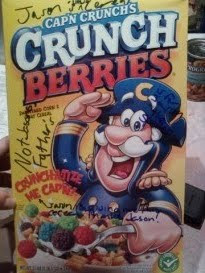 I made the comment that I should have purchased sugar cereal for everyone in place of the Hanukkah gifts that are being opened this week. Somehow I think they would have been fine with that. 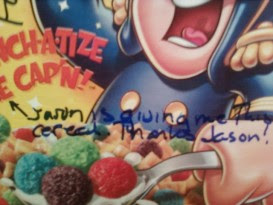 Of course, after Jim tagged the box and left the room, the older boy strolled through the kitchen, noticed what was going on, and pulled out the marker to add his two cents. And his name…all over the box. Trust me, you don’t need photos of that part. The box is a hot mess. In fact, not only that, but I happen to know that a certain 42-year-old man hid the box from his sons, so they will be crushed this morning when they can’t find it in time for breakfast.

Funny, nobody is ever this excited about bagels.

Next post: Know Why I Never Lose My Marbles?