You Couldn’t Make This Stuff Up, And Neither Could I!!

First of all, let me say that I had an absolutely fabulous birthday. Thank you to each and every one of you who made it special for me, in your own way!

As it turns out, the weirdest (and probably funniest) thing to ever happen to me on a birthday happened on this one. I will document it here and keep my fingers crossed that it will be as funny to you when you read it as it was for me while it was happening.

I started out the day with the Suburban WoW livestream (the rerun is playing through this coming Friday, when we’ll broadcast our next show!). Weaselmomma took me to lunch afterwards (thanks again!), and then I headed home.

As I drove the car up the driveway and into the garage, I noticed something hanging on my front door. It was a delivery slip from a local florist. (Yay! Birthday flowers!) The slip said that a flower delivery was left for me at the house across the street.

Here’s an aside about this particular neighbor. You know how some people are “eccentric”? These people are eccentric to the hundredth power. Nice? Absolutely. VERY nice people. But totally bizarre. I am 100% certain that I won’t be able to express to you how offbeat they are, but to give you an idea of it, here are a few of the unusual goings-on over there:

~ They have that back up beeper on all three of their cars. The dad works nights.
~ Over the years, we’ve seen each of their three kids mow the lawn, and the dad sits in a lawn chair sometimes, watching to make sure they don’t miss a spot.
~ We used to see, when their youngest was in middle school, the parents follow her to the bus stop, about ten paces behind, either carrying her backpack for her or pulling it in a wagon before handing it to her at the bus stop. (She has absolutely no physical impairments that would prevent her from carrying it herself)
~ The dad works on their cars all the time, and mostly this takes place in the garage or on the driveway, but every now and then, he’ll pull the car right up onto the front lawn, parallel to the house and directly in front of the porch for his maintenance session.

I walked across the street and, noticing that there was a car in the driveway with the hood up and the garage door was open, I peeked into the garage for signs of life and found nobody. I stepped up onto the porch and rang the bell. Nothing. Rang it again. Nothing.

When I left the porch and stepped back onto the driveway to head home, I peeked into the garage again and noticed that the man/dad of the house, R, had just re-entered the garage from the backyard. I said, “Oh, hi R! Did some flowers get delivered here when I was gone this morning?”

He went into the house from the garage and was gone only a minute when he came back with a vase in his hands. As he walked towards me, I noticed that the flowers were in browns and oranges, and they looked…fake.

My thought process over the course of three seconds or so as he walked over to me:
~ Wow, those look fake!
~ Browns and oranges. Odd choice for a birthday arrangement, but I do have an autumn birthday…
~ Wow, those ARE fake!
~ But it’s the thought that counts.
~ I wonder who sent them? Had to be Jim or my parents…
~ Wait, these flowers are really ugly.
~ This is going to make a great blog post if I can do it sensitively.
~ This is weird!

He handed me the “arrangement”, which was a cheap glass vase with silk flowers that you would get from the craft store, but they weren’t even arranged. They were EXACTLY how you buy them at the craft store, a bushy bunch of flowers, still connected to each other by a really thick stem at the bottom, sort of like this (but way uglier): 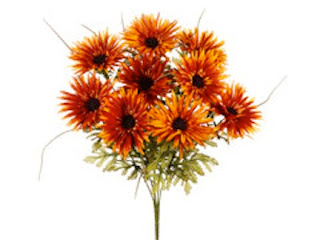 I said, “Thanks R! I appreciate it!” and turned towards home, noticing that this ugly bunch of silk flowers was sitting in a vase that had WATER IN IT.

I turned back around and said, “Hey, R? Was there a card? There’s not one here and I have no idea who sent these.”

He said, “Oh, I’ll go check. Maybe it dropped on the floor.” He went back into the house.

He came back outside with a gorgeous, REAL arrangement in his hands. It was wrapped in cellophane and tied with pink ribbons. He sheepishly laughed and said, “Oops, I gave you the wrong flowers. Here are yours.”

As I traded with him, I said, “That’s okay. Thanks so much!”

Walking back across the street, I was nearly in hysterics. I couldn’t wait to get into the house so that I could bust out laughing. Jim was still in a meeting, so as I put the flowers down on the counter and started unwrapping them to get to the card, I dialed Weaselmomma to tell her about it. As we were literally in tears from laughing so hard about the brown and orange silk flower bush sitting in water in the glass vase, I did a double-take on the card: 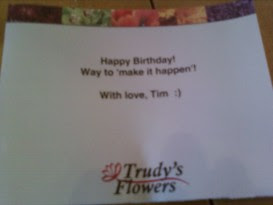 You might remember that, when I attended the BlogHer conference waaaay back in July, I was really excited to meet Tim Gunn from Project Runway but forgot about his special appearance when Momo and Piper invited me to go with them, Secret Agent Mama, Angie from A Whole Lot of Nothing, and Colleen from Mommy Always Wins for a quasi-Cre8Buzz blogger reunion at the Sears Tower. Momo, Piper, Secret Agent Mama and I spent a couple of hours at a bar talking, laughing, and drinking $3 Patron Margaritas while Angie and Colleen went to the top of the Sears Tower to step onto the Ledge. When we returned, I discovered that Sue, my great friend and roomie, stood in line at Tim Gunn’s appearance even though she had NO desire really, to meet him; it was all for me. And she brought a signed photo back for me. 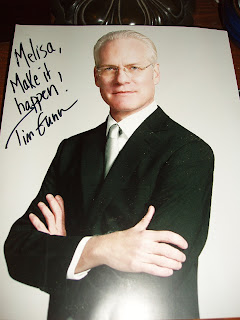 If you’re a huge Project Runway fan like I am, you’ll notice right away that the tagline is wrong. Tim actually says “Make it work!” Though I’m a huge fan, the four margaritas delayed my noticing this, but I eventually learned that Sue just grabbed the photo and signed it herself. It’s now framed and hanging in my work space.

The flowers were from Sue!

I said, “No, it’s not, because each and every time I receive flowers in the future, I’m going to think of today and Sue!” (and Tim Gunn. And my weird neighbor.)

We got off the phone, and I called Sue to retell the story again, from start to finish.

Thanks again Sue! Love ya! 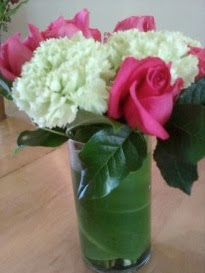 Next post: Face It, This Isn’t Your Best Face.