This is Probably the Best Blog Post About This Particular Topic. Maybe.

Back in 2006–I can’t believe it’s been three years already!–I went to Europe on a spectacular vacation with Kate and her family. Our first stop was Liverpool, England, with a side trip to beautiful North Wales.

We spent a great day walking around the town of Conwy, North Wales. The town is home to Conwy Castle, which was built in the THIRTEENTH CENTURY, which is amazing when you think about it, if you’re American, anyway. We don’t have anything nearly that old here, of course!

As we explored Conwy, the juxtaposition of new against old was a sight to see. It was a bizarre thought, to me, the American, that someone could actually live in and conduct their 21st Century day-to-day business in a place that’s been in existence for eight centuries. (And I could live there in a heartbeat!)

I was taking everything in while walking and talking, and this sign caught my eye. 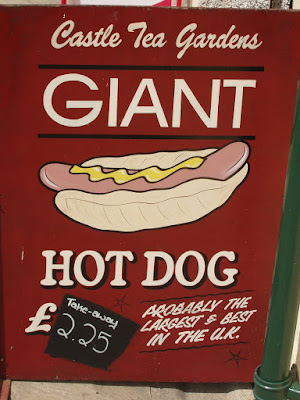 It seemed to me that it fit right in with how Americans think of folks in England and Wales: that they are prim and proper, and very humble. I had a great laugh about it. I thought it was adorable that the owners of the restaurant weren’t going out on a limb; they weren’t claiming that they do indeed have THE BEST and THE LARGEST hot dog in the U.K. And really, they’re just being honest, right? They don’t claim to know for sure; they just think that they probably have the best and largest. Heck, I just wanted to try it myself, because their sign was so charming! (But alas, it wasn’t lunchtime!)

You would never find a sign like that in the States. In stark contrast, Americans have a reputation of being brash and over-confident, and dare I say, subject to exaggeration. The sign, if it were on this side of the Atlantic, would have claimed that it was THE BEST and THE LARGEST hot dog, on no other basis but the owner’s decision on the wording for the sign. In fact, in certain areas (popular vacation spots, for example), you’ll find signs just a few feet from each other, each claiming to have the best *insert item name here*.

What is it about the American confidence level? Is it based on lies told solely to get ahead? Is it based on outstanding self-esteem? Does it go all the way back to the time when we rebels left England to create the colonies?

And what is it about England and Wales and their politeness? Does that go back to the traditions and rituals of having a monarchy? Is it just plain maturity, gained after so many centuries? Does it have something to do with Elton John?