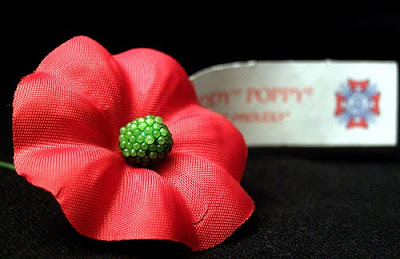 Today is Veterans Day. A tradition that goes all the way back to World War I is the distribution/wearing/selling of poppies, because of the bloody battle in Flanders Field in Belgium and the subsequent growth of poppies in the demolished battlefield, on top of the soldiers’ graves. (EDITED: Thanks to Liz, who pointed out that the poppy tradition in the U.S. is actually on Memorial Day. My bad; I thought they were sold on both holidays!! Oops!)

In Flanders fields the poppies blow
Between the crosses, row on row
That mark our place; and in the sky
The larks, still bravely singing, fly
Scarce heard amid the guns below.

We are the Dead. Short days ago
We lived, felt dawn, saw sunset glow,
Loved and were loved, and now we lie
In Flanders fields.

Take up our quarrel with the foe:
To you from failing hands we throw
The torch; be yours to hold it high.
If ye break faith with us who die
We shall not sleep, though poppies grow
In Flanders fields.

It’s been a long-standing tradition that veterans’ groups sell plastic poppies (or give them, in exchange for a donation) to commemorate Veteran’s Day. (Edited: yeah, Memorial Day. Ugh.) I remember going to visit my Grandparents when I was a kid, and seeing a fake poppy attached to my Grandfather’s rear view mirror, in his car. Many times. Back then I had no idea what the poppies were for, but I sure loved them!

After a while, he used to let me have them. I used to twist the little wire attached to the flower around my finger, so I could wear the poppy like a ring. I fiddled with them endlessly whenever I was lucky enough to get one, until the edges of the flower became shredded (because oh, by the way, when I was a kid they weren’t made of plastic: they were made of cloth!). Sometimes, the center of the flower, which was what was attached to the wire, would totally pop out because I messed with it too much. I’m not sure if any little girl every appreciated those poppies as much as I did!

Whenever I see those poppies these days, I think of Grandpa. In fact, I think I just might try to contact someone from our local VFW, to see if they have an extra poppy or two. I’d like to run out and get one.

On this day of Remembrance, I want to say thanks to all of our veterans (including my dad and my husband!) for all of their contributions, as well as to our active duty military for all that you do to keep us safe!!

Previous post: Could You Do Me a Quick Favor? (Please?)