It’s Not ALWAYS About Me(me), But Sometimes? It Is.

I’m a sucker for a good meme, as long as I can change the rules if I want to in order to make things easier for me, quicker for me, and/or entertaining for me. Oh, and you. Sure. Entertaining for YOU, too.

Weaselmomma tagged me almost two weeks ago for a photo meme, and last night the time was finally right for me to figure out how I could manipulate the system to create a spectacular post for this, the final day of November and not-so-coincidentally, the FINAL day of NaBloPoMo 2009. (Did you notice I’ve posted daily for 30 days? You better had noticed!)

The person who is tagged goes to the first photo file on their computer and to the tenth photo in that file. The tagged person posts the photo on their blog and tells the story behind it. Then the person tags a few people from the blogs that they read.

Wow, those are some pretty loose rules. I can follow those with no problem. Actually, no, I can’t. I went to the tenth photo in the first photo file on my computer and it was boring as hell. It was a photo of a pile of dirt, and I’m not even kidding about that. I’d explain it, but then I’d be doing the meme 1 1/2 times. Also? I like to keep you people guessing a little bit so I’m keeping it to myself.

Anyway, I went to the tenth picture in the second photo file and it was a photo of one of my boys, taken when (but not because, mind you) he had a HUMONGOUS zit right in that painful area in the crease of the side of his nose. I couldn’t post that, because that violates my personal rule that requires me to refrain from posting photos that would truly embarrass my kids. So that was out.

By the time I got to the third photo file and counted to the tenth picture, I realized that as long as I wasn’t cracking the whip on myself as far as using the exact picture “the rules” told me to, I might as well go ahead and pick one that I thought I’d enjoy describing. The funny thing? That meant that, with the exception of my mentioning that Weaselmomma tagged me for a meme, this post is exactly like many of the others I publish, because I constantly choose pictures to write about for you. So I have sort of double-backed and run myself into a vicious circle, but in the end I think I can safely say that I have entertained myself so far and am happy to continue on this track.

What was I supposed to do again? Oh yeah. Here’s the photo: 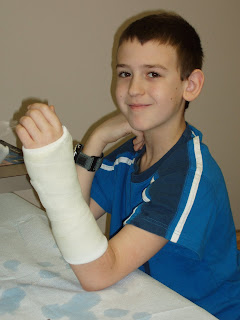 As you smart folks will conclude, this photo was taken when the younger boy broke his wrist. It happened in 2006; wasn’t he an adorable little tyke? Basically what happened was, I was chaperoning the older boy’s youth group trip to the roller rink, and the younger boy tagged along. He got his skates, made his way out to the rink, and promptly fell down, hands first. He came over to me in the snack area and complained about his arm. I got him an ice pack and had him sit there for a while so I could keep an eye on him, and though he maintained that it was sore, he didn’t want to leave. (But he didn’t want to skate either.) I sat there with him until the end of the skate party, and after the three of us got home it occurred to me that, since he was still complaining, perhaps I should have a medical professional look at his arm. Of course I felt like a horrible mother when we found out it was broken. They splinted it up at Urgent Care and referred us to an orthopedic doctor, who I made an appointment with as soon as the office opened the next morning, and that’s how this cast came about. He’s still got the cast, because he kept it when the doctor removed it. It’s a lot dirtier that the pristine white in this photo, that’s for sure.

Epilogue: Just a couple of weeks after this cast came off, the older boy broke his wrist, roller blading outside (Helmet? Yes. Wrist guards? He was supposed to wear them but he didn’t on that day. Argh.) And a week after the older boy broke his wrist, he broke his toe. It was a bad couple of months for injuries, and I was a bit anxiety-ridden about each subsequent visit to Urgent Care, for fear I’d be arrested for child abuse!!

And now for the tagging. I am going with an “M” theme and tagging the following people: Michelle, Momo, Mags, and Melissa. Have fun, ladies, and feel free to twist the rules in any way you see fit!