Could You Do Me a Quick Favor? (Please?) 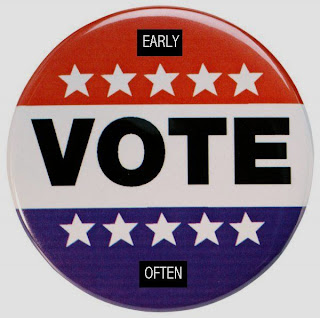 My Vancouver-livin’, hockey-lovin’, zen-seekin’, Michael Jackson admirin’, music-adorin’, lovely lookin’ friend Huckdoll recently nominated me for the 2009 Weblog Awards (thank you!!), and although I will certainly not cry if I don’t make it to the finals, I think it’s worth a shot. I mean, what the heck? Who’s to say I shouldn’t be a finalist?

Here’s where you come in. The Huckster, as I refer to her in my head but never directly to her in e-mails or comments on her blog, was so sweet that she nominated me in two categories.

The first one is “Best Individual Blogger“. Although I think my blog is pretty darn great and am humbled at the nomination, Heather, Tara, and Scary Mommy are also up for that one, and I don’t want to go up against these fine ladies (and frankly, have not a chance in hell of winning over them anyway!) (Boy, that’s a defeatist attitude if I ever wrote one, huh!).

Where I’d really like to take over the world is in the other category the Huckster chose for me, which is “Best Large Blog“. I had a little laugh because I don’t (yet!) consider my blog to be large, but according to the guidelines for the nominees in this category, the blog has to have a Technorati Authority number between 301 and 500. Well, the last time I looked at my Technorati Authority, I was at 28. You can imagine how shocked I was to look at it recently and see 471. WTH? (Actually, I don’t care how that happened. It just did.)

Anyway, there are only about twenty-something other nominees in this category with me, and although I’m sure they’re great blogs, none of them are written by anybody I know, and so if I can get to the finals I really will feel good about all of the shameless promotion I will feel compelled to do, because I’m *that* Type A about stuff like this. (Go Big or Go Home, remember?)

The nominations close on November 20, but the finalists aren’t announced until December 28. You can vote daily. I put the link over there in my left margin; if you could do me a favor and click the link each time you come to read my blog, scroll down to find me in the nomination list (Don’t add me again! Kat covered that already! 🙂 Too many duplicate noms and they reserve the right to throw me out. wah.) and then click the plus sign (no signing in necessary!!), I will love you forever. Well, I already do. But really, I will hold you in much higher regard than I already do, even though that’s barely possible.

Thanks in advance! I’m going to go figure out my campaign speech in case I make it to the finals and need to do some stumping.