Marketing is part of what I do at the salon where I work. Though I don’t have a college degree in the subject, I consider myself to be a little bit savvy about finding our target audience (middle-aged, well-off women) and gearing our advertising to them. The entire idea behind good marketing is to make your service or product irresistable to a certain group of people, right? Think about the commercials that are placed in the middle of children’s programming: how many times have your kids declared, “I want that!”, just because a 30-second spot about some junky toy that will eventually end up under the bed or at the bottom of the closet was cleverly placed during the broadcast of “Phineas and Ferb”? A little annoying, but marketing departments are just doing their job, right?

What happens though, when a marketing department encourages bad behavior? Over the summer, I went to McDonalds with the boys, and was annoyed to read our cups: 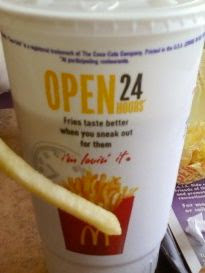 “Fries taste better when you sneak out for them.”

Really? Hmm. I took the picture with my cell phone and then simmered on it for a while. Then I thought, “Alright, who is REALLY going to take action after reading a McDonalds cup and start sneaking out for fries?”

Last week, my friend Debbie posted a picture on her Facebook page that she had received as part of an e-mail ad from Abercrombie (a retail label that is famous for controversial advertising directed at teenagers). I couldn’t believe it. (Well, I could, considering the source. But I was completely disgusted.)

“It may look like you’re listening in class but appearances can be deceiving. Text away in our softest fleece with the perfect pocket to conceal your latest conversation.”

Are you kidding me? As the parent of two teenaged boys in the 21st Century where there is sexting, easy-to-find porn (and other things they don’t need to be looking at) online, loosened standards in the Motion Picture Association rating system, and a general blurring of what’s acceptable in society, I don’t need for Abercrombie to start yet another “fire” that I have to extinguish. I have enough problems trying to raise these two young men to adulthood, relatively unscathed and relatively well-behaved. I realize that many teens (including my own) are going to take certain risks (or try to) as they find their way to adulthood, and many of them think that they are beyond authority, but seriously, for a company to basically tell my kids that they can actively and SNEAKILY engage in texting at school–something that is not only against the rules but wrong for so many other reasons–if they buy these fleece tops, I’m not happy about it, to say the least. It’s one thing to advertise to a target audience, but it’s quite another to encourage that target audience to break rules. Additionally in this case, the fact that this company is encouraging teens to distract themselves from their education is, to me, unfortunate.

The only other thing I can say is that I’m glad my kids have never cared about labels, so we’ve never had an Abercrombie issue–or article of clothing–in this house. If I were an Abercrombie customer, this ad would be enough for me to not shop there ever again.

Next post: Great Service Is Great Advertising, Don’t You Think?