Every year, I get a Halloween costume for Roxie.

Yes, I know that this is bizarre behavior.

Do you know what else is bizarre? I get the costume ONLY for a photo shoot. She doesn’t actually wear it for longer than about a ten-minute period. So maybe I’m bizarre, but not completely weird. (RIGHT?)

Anyway, in the past, Roxie has been a devil (that one lasted two years: the puppy years!), a hot dog, and a princess. This year? I had a stroke of genius. I put my dog in a costume that is not only unique, but timely. And way more hip than that stupid hot dog costume that all of the other bitches wear on Halloween. (Sorry, couldn’t resist with that one)

First, let me get you warmed up.

You already know that I really like Lady Gaga very much. I think she’s super talented, and although her fashion choices are, shall we say, uniquely her own, I really think she’s got it going on. She is an artist in the true sense of the word. Just look away from the Kermit outfit, would you? That one was the worst. 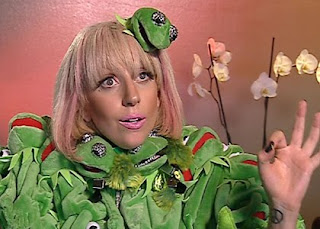 The bubble outfit was pretty cool, and she even inspired Andy Samberg on SNL to dress in one. 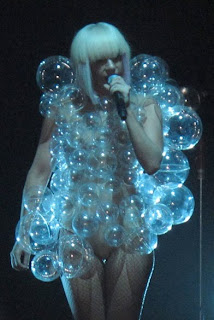 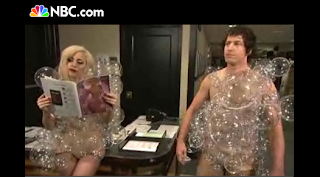 She made a big–er–splash at the MTV Video Music Awards this year (these are only some of the looks she wore!)… 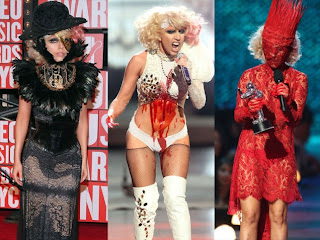 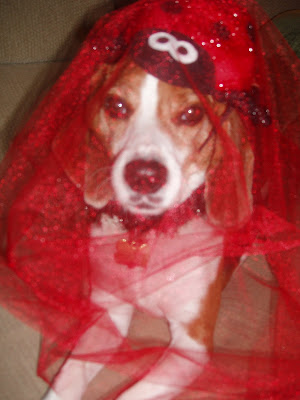 She’s either thinking, “Wow, what a great idea this was!” OR “Get me the hell out of this costume!”
I’m not sure which. 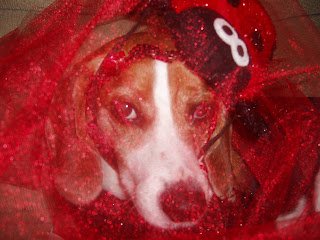 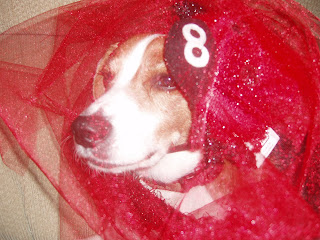 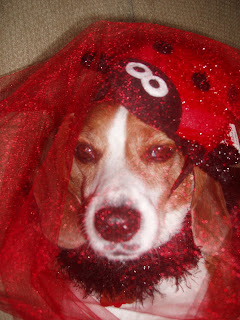 Ready for her closeup…

So, yeah. Insane or not, I spent six bucks on the elements of this costume, for about fifteen minutes of fun while I took the photos. (The jury is still out on whether SHE had fun. I’m thinking not.)

And then, when the shoot was over, all she wanted to do was rip that sucker up, piece by piece.