Stopping To Enjoy the Flowers

I wanted to give you a photo update of my son’s Boy Scout Eagle project (at our temple), because this week it just looks spectacular and I remembered that I never updated on the blog after the first day of completion!

I thought it looked totally amazing on the day the installation was complete, especially because before, there was nothing in the temple’s front yard except for grass. See? Nice, huh? 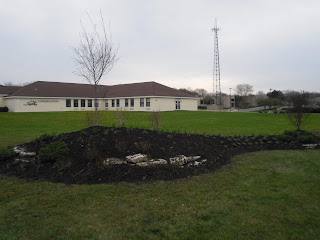 Over the past few months (It was *just* springtime when this was all done!), we’ve been taking pictures at various stages of growth and bloom; I want to do something with the various photos for his recognition ceremony in December.

He’s received so many great compliments from the people at the temple; they tell him how much they love driving up and seeing the gorgeous landscaping, and that it’s really added so much to the grounds. He loves hearing that–who wouldn’t?–and still cares for it even though he’s off the hook, responsibility-wise. He drives by it often and if he sees some large weeds, he’ll pull the car into the parking lot and yank the weeds out of “his landscaping”. (Honestly? I do it. too.)

This past week, we were overjoyed that things were blooming big and blooming beautifully, just in time for the High Holidays. I made a mental note to go back with a camera, and did it this morning. Check it out! 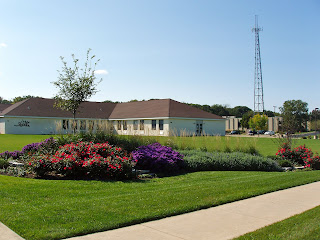 I know. WOW. Still so proud!