Just in case you didn’t get enough of my lessons on buying new cars in my recent series, I’ve got another lesson for you.

Let’s say that you have a 17-year-old who is in the market for a car and you want to navigate the treacherous waters of car buying with a teenager. Do you have a plan? I’ll tell you how it went in this house; we just finished the entire process last night.

Step 1: Decide WHO is paying for the car long before the kid gets his permit. In our house? No free rides. The kids have to buy their own cars. The older boy has been allowed to use our two cars since he got his license last summer, but we are definitely getting to the point where he needs his own wheels, with working and all.

Step 2: Try not to laugh when your kid, at the age of 13-14, starts talking about how his first car is going to be a brand-new one. Instead, encourage him by saying that a new car does cost a lot of money but, if he wants to save for it (and since you’re not going to allow financing), you wish him the best of luck.

Step 3: Praise your kid when he finally, 3 years later, realizes that he is not Richie Rich and a new car is just not in the cards for him until he’s out of college and working at a real job. (Maybe.)

Step 4: Start pointing out cars when driving by car dealerships to see what the kid likes, because he cannot express it in words.

Step 5: Get a little annoyed when your kid doesn’t seem to agree or care that he should also check the classifieds and Craigslist because he’s more likely to get a better deal from a private seller.

Step 6: Keep your cool when you discover that the kid still has impossibly high standards for a first car as it relates to his budget, and would still rather try to find one at a dealership.

Step 7: Troll some car dealerships in the area while the kid is at work to figure out where you should NOT take him on his next day off. For example, car dealers where every.single.car. has evidence of having been in a wreck. Or car dealers where the cheapest car is not only a piece of crap but also priced at about 600% higher than Kelley Blue Book.

Step 8: Print out a bunch of cars for sale in his price range on Yahoo Autos (locally) and call insurance company to get an estimate of how much the kid’s insurance cost will go up (for him: he pays for that!) on each of them, so he’s got an idea of how much the type of car he chooses will affect insurance pricing.

Step 9: Get excited when the kid finally narrows his search down to a couple of different cars that he really likes, all in the general area of his budget, and jump for joy when he agrees to keep his mind open to other cars that may pop up in a search that might not be exactly what he wants.

Step 10: Sigh heavily when the kid narrows his favorite cars down to one super, big-time favorite and claims that he might want to hold out until he gets one…and one costs, on average, twice what he has.

Step 11: Resign yourself to the fact that you may have to continue to juggle cars until wintertime, when Jim cannot possibly ride his bike to work on the craziest schedule days because he would turn into a Jim-sicle, and plan to put major pressure on the kid by early November to just FIND SOMETHING.

Step 12: Take the kid around to the same used car dealerships you eliminated for various reasons, only so you can point out the bad things that you would be looking for in a car (red flags), like excessive Bondo, doors that don’t fit on the car properly, and other things that auto nightmares are made of.

Step 13: Get up on Labor Day and take the kid, at his request, to a small used car dealership 30 minutes from home to look at the car he really wants, priced at double his budget, just so he can see one in person. Notice that, even at its listed price, it has clearly been in an accident because the door doesn’t fit on the car properly. While you’re there, check out the other cars that the dealer has, to try to find something cheaper.

Step 14: At the same dealership, ask what they have in the kid’s price range, which turns out to be a 1993-ish Honda Passport that looks like it’s already lived a thousand lives and might possibly fall apart into a million pieces if you drive it over a speed bump too quickly. This same car also has a “Check Engine” light that goes on upon starting up the car. Of course.

Step 15: At home, look for newspaper classifieds online and discover that nobody advertises cars for sale in the newspapers anymore except for the dealers. Go to Craigslist and print out about 25 suitable cars that are within or very close to the kid’s price range.

Step 16: Make a game out of predicting which cars your picky child will dismiss by casually tossing the printed sheets to the floor while shaking his head and saying, “nuh-uh.” Laugh when the kid’s Dad (Jim) gets it 100% right.

Step 17: Watch over the next two days as your kid does nothing with the listings you’ve printed out, because although he likes the idea of some of them, he is really not thrilled about any of them, since they are not his fave car.

Step 18: Tell yourself that you’re backing off now, and that you want to give the car search a rest for a few days, because you are Up. To. Here. with car talk, and the kid is thinking…

Step 19: Tell the kid that you’re behind him in his decision to try to save up a little bit more money from his new job so that he has a better chance of finding the car he really wants after a month or two of paychecks.

Step 20: Be amazed when, the day after this decision is made, your kid goes to Craigslist and finds the car that he wants, priced only $300 more than his budget, advertised by somebody in the next suburb south from you. Tell the kid that yes, it’d be a good idea to contact the owner since the ad not only says that the car only has a couple of extremely minor fixable problems, but that the ad says “Must go: relocating”.

Step 21: Have the kid e-mail the seller and arrange to check out the car as soon as your family schedule opens up, which is two long days later.

Step 22: Check the Kelley Blue Book price and happily discover that the asking price is right in line with (and perhaps, depending on the true condition of the car, might be lower than) where it should be.

Step 24: Tell your kid that you are offering to loan him up to $500 towards the purchase of the car (which will be paid back with his next two or three paychecks), should he need it.

Step 24: Find out from your kid BEFORE HE LAYS EYES ON THE CAR what is the highest amount he wants to pay for the car, which ends up to be $50 more than what he actually has ($250 less than the asking price), because he doesn’t want to totally take advantage of your offer if he doesn’t have to. (what a kid!)

Step 25: Upon arriving at the pre-designated meeting place, drive up next to the advertised car and A) let your chin drop to the ground (when the seller can’t see it, of course) because the condition of the exterior is so completely amazing, B) immediately try to console your own inner teenager, who is totally and completely jealous that your son might get to buy this sweetheart of an automobile and C) put on your car-buying face because you really want to execute the deal that will make it possible for your kid to have this car.

Step 26: Discover that the seller is the young (22) wife of a member of the U.S. Armed Forces, has a toddler and is again pregnant, drives the car as their primary vehicle, and must get rid of it because she is moving to Camp Pendleton. Be thrilled when she tells you that her husband buys cars, fixes them up, and then sells them.

Step 27: Keep your poker face on when the kid takes the car for a test drive (with the young woman’s husband’s friend riding shotgun), and then when his Dad does the same, listening to the adorable seller talk incessantly about her first car experience. Admire her for telling you that she put the information about the minor problems with the car in the ad because she didn’t want the bad karma that might come with not being completely and totally honest about this car.

Step 28: When husband comes back and talks to the seller, turn to your kid and raise your eyebrows, mouthing “Well?” Watch him give you one nod and whisper that, if necessary, go up by $50 on the original bottom line price he gave you before. Notice that he is doing his best to not jump out of his skin because he wants this car SO very badly.

Step 29: Turn to the seller and ask if the price is negotiable. When she says, “A little bit. What were you thinking?” Give her your kid’s original bottom line price, which is $250 below what she advertised.

Step 30: Smile in a big way when she tells you that the price you have offered is the price that she and her husband decided would be their bottom line. Shake hands and thank her so very much.

Step 31: Be a little disappointed that she needs the car for the next week (remember, it’s her primary vehicle). Do NOT give her any money for a deposit because really, you just met her. (and she didn’t ask for it anyway) Arrange to meet them again, one week later, in the same parking lot.

Step 32: Tell your kid that it will be very difficult, but he should try not to be too excited because until he has the keys in hand, it’s not a done deal.

Step 33: Live life as usual for the next seven days as best as you can.

Step 34: Be so completely and utterly happy on purchase day when all goes well, and enjoy experiencing this major milestone as a family. 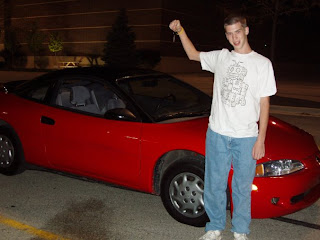 Previous post: He Didn’t Mean "We" In The Royal Sense, But At The End, I Did.