This is Why Your Co-workers Only Get to Give You Cake.

Most people are pretty familiar with the kind of birthday celebration you get at the office these days. It looks something like this:

Things were quite different, however, back in the day. (and by “in the day”, I mean anytime before probably 1985 or so)

My (and Julesie’s!!) Dad, who has been a hotel manager since the early 1970’s, once had a party thrown for him by his staff that I will never forget; in fact, I just found a lone photo of it in my own collection. But let me give you the intro story first.

The year? 1979. The place? A conference room in a Holiday Inn, in Texas. The time? The middle of the workday.

As I recall, it must have been a surprise party–I think my mom may have even helped plan it. Mom brought Julesie and I to the hotel–Dad’s workplace, mind you, for this party. The room was full of people: probably a few friends, but mostly it was full of Dad’s employees.

He walked in, “Surprise!” yada yada yada…and then the belly dancer arrived.

Yes, you read that correctly. A belly dancer. Maybe Housekeeping put the call in, who knows? She danced around the room (and our Dad) with her jingly costume, wishing Dad a Happy Birthday. It was the first time I had ever seen a belly dancer in person: I thought she was beautiful, but to be honest, at nearly eleven I was a little confused about the whole thing.

After the dancer got jiggly with it, it was time for cake. That’s where the photo comes in. Here I am, next to Dad: 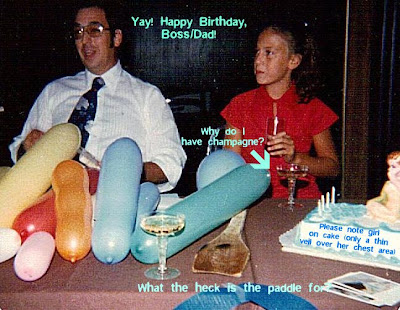 Let’s investigate, for a moment, the details. First of all, the paddle. Huh? I’m guessing that was for birthday spankings (yes, at WORK), but I think I must’ve blocked out that part of the party.

Champagne. The glass in front of me wasn’t really mine. Note the alternate drink in my hand. Probably should’ve gone with something stronger.

And then there’s the cake. The cake topper was a nude woman with just a thin, gauzy piece of fabric covering her ta-tas, just so TOO MUCH wasn’t revealed.

The only thing that could’ve made this photo better is if I had been leaning down towards the cake, grinning at the camera and giving the thumbs-up; I guess, though, that the photo–as is–shows the truth: Dad was having a blast, and I was sort of biting my lip, feeling a little awkward.

And that, my friends, is how they celebrated (some) birthdays at work in the 1970’s, before human resources departments had to step in.

By the way, Julesie reminded me the other day when I told her of my photo find that the next morning, Dad ate breakfast in the hotel restaurant as usual (we lived there for a while) and the waitress brought out a covered plate. When she took the cover off, she revealed two grapefruit halves, each with one cherry in the middle. Oy vey.

Previous post: Let Me Take You For a Spin…