They Weren’t Fit; They Were Just Drawn That Way.

As if we didn’t have enough to worry about these days, what with everything going on in the world and how busy we are all the time and all of the convenience foods that we devour because we don’t have time to cook healthy meals regularly, now we also have to worry about how technology is making it harder for us to fit into our clothing.

Because of Twitter, Facebook, blogging, and e-mail, we (That’s the Royal We) spend alot more time sitting than we did a couple of years ago, and that’s not cool. 21st Century Living didn’t look like this in my head, really. I don’t think anyone really knew what to expect. A few folks had some great ideas, though…

Oddly enough, in the days before Twitter, Facebook, blogging, and e-mail, there were The Jetsons. Conceived by some super-genius creative types, this cartoon tried to show us the future the way nothing had done before. And, if you watch it these days, it’s even more amazing to see how right-on so many of the ideas were. The phones, the video conferencing, the dog on a treadmill, the instantly prepared food, moving sidewalks; we’ve got all of that. (Flying cars? Well, we do have hovercrafts, so we’re getting closer!)

The one area that Hanna-Barbera overlooked in their big, bright vision? The waistline. I mean really, check it out. 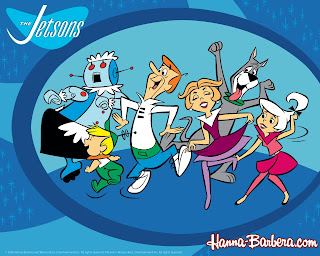 They totally got it backwards: the most physically-active characters on The Jetsons, Elroy and Rosie the Robot*, are the ones who were drawn a little on the heavier side. George, Jane, and especially daughter Judy are really quite svelte considering how little they have to move to get anything done.

Maybe, just maybe, since The Jetsons is set in 2062, we’ve got some great health and fitness technology ahead of us, to match all of our other modern-day conveniences. Hanna-Barbera may not have been telling their entire story!

In the meantime, I’ve got to get moving. No, seriously: I do.

Check out Weaselmomma’s take on this topic over at World of Weasels, and join us tomorrow for our Suburban WoW livestream; we’ll be tackling this topic among many others starting at 10 a.m. Eastern, 9 a.m. Central, 7 a.m. Pacific. For more info on that, visit our Suburban WoW blog!

*I know, I know: robots have no capacity to be heavy or slim because it’s all in the way that they are built, but humor me for the sake of this very creative post.

Previous post: No Surprise; It’s Been Closing For Years Now