Quite Possibly the Cheapest Baby Ever

I found this little gem that I’m about to show you a couple of weeks ago, but I’ve waffled on posting it because of the timing with the current national healthcare controversy; I’ve never intended to be political on my blog and in fact I still don’t intend that*. I just thought that this was pretty cool and amazing in some ways, and I wanted to share it with you.

We often make fun of our mom for keeping EVERYTHING. Really, she does. Sometimes it’s a little strange, because we find things and wonder why she kept them. Sometimes, as in this case, it’s fun.

I found the hospital bill from my birth. No, I’m not kidding. Actually it’s not really a bill; it’s more of a receipt or a statement. Regardless, it’s almost 41 years old and I had a good chuckle when I checked it out.

First of all, my birth cost less than $550. That in itself is something to behold. Yes, I know it was almost 41 years ago, but even if you adjust that for inflation, it would still be…well, who am I kidding? I might be able to do the four basic math functions with MENSA-like skill, but when it comes to complex equations like “adjusting for inflation”, I’m no smarty-pants.

Second, the drugs only cost $9.05. Today, $9.05 would buy some really great placebos. And maybe a package of Tic Tacs.

Third, the five-night stay was $395. Cheap, yes, but the fact that it was a five-night stay and my mother gave birth naturally definitely proves that this is from the 60’s (LATE 60’s, mind you!), because nowadays the women who have natural births practically give birth in the car at the traffic light right outside the hospital before going home with their new baby (and a bill for thousands of dollars).

Lastly, you will note that there is not a laundry list of charges for things like Tylenol (or Bayer, or whatever pain reliever was used back then!), a pillow, the water pitcher, or any of the other ridiculously over-priced things that a hospital will now bill you for, squeezing every last dime (and then some) out of you and your insurance company. Amazing. The bills we received after our boys were born were pages and pages long. And covered EVERYTHING. Literally.

It makes you want to go back to a simpler time in some ways, doesn’t it? 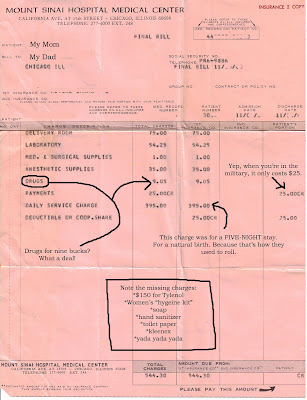 Next post: No Surprise; It’s Been Closing For Years Now