My sister Julesie came over last night, and boy did we have food and drink plans. We like to try new recipes when we get together, and this instance was no different. We had our normal phone conference, during which we talked about a few options and made our decision (I’ll tell you about that in a moment).

Then she said to me, “How do you feel about Bing Cherry Mojitos?”

Of course I replied, “I feel GREAT about them!”

Then she started sending out tweets to make everyone jealous, like this one, which you definitely shouldn’t click on if you have problems with the F-word.

Of course, like many ventures that she and I take on, the recipe included a little more work than you would think. She was running late, but for good reason. She sent this amusing tweet. (By the way, are you on Twitter and NOT following her? Why? She’s hilarious! Follow her here.)

She got the first part of the drink recipe mixed up, and then headed over here. I had started to chop the stuff we needed for dinner, and as soon as she arrived we got busy.

For dinner, we had Lime and Honey Glazed Salmon with Warm Black Bean & Corn Salad from Rachael Ray’s book “365: No Repeats–A Year of Deliciously Different Dinners”. GAWD was it GOOD! And pretty too! See? 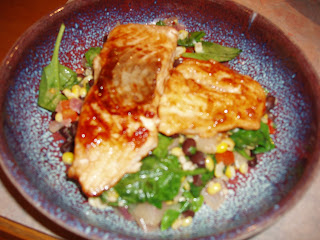 And the BING! CHERRY! MOJITOS!?? Well, of course they did not disappoint. Julesie ladled them into glasses, 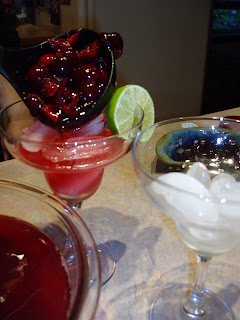 and we admired their beauty for a moment before drinking them. 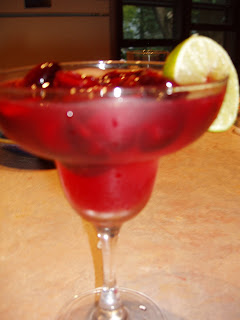 All in all, a very yummy evening all around.

Oh, did you want the recipe for the BING! CHERRY! MOJITOS!?? No problem. You only have to look at Julesie’s PST (Public Service Tweet), right here.

Next post: So Much To Do, So Much Time. And yet…

Previous post: How To Make A Duct Tape Wallet