When I Realized There’s Enough To Go Around

This post, about an intense rivalry I’m currently having, is long overdue. I need to give you some background information first, though.

Back in my teenaged years, the U.S. was in the middle of what was called “The Second British Invasion” (the first being The Beatles, of course!); we were crazy about all things UK; the big groups were (just to name a few): Wham, Tears for Fears, Pet Shop Boys, Bananarama, Spandau Ballet, Depeche Mode, Culture Club…the list goes on.

And of course, there was Duran Duran. I, along with my group of friends, would spend hours upon hours watching MTV (when it played nothing but music videos. remember that?), just waiting for a Duran Duran video. Any video by them would do. When one finally came on (and they did back then, once or twice every hour!), my friends and I would move really close to the television which, of course, eliminated some of the real life distance between us hormonally insane high school girls and these pop gods. In our minds, anyway. 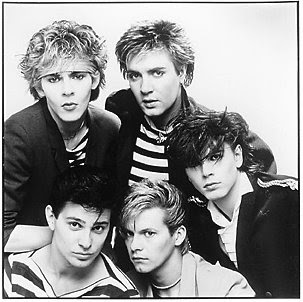 We knew the videos by heart. We would point at our favorite parts and say, “Look! Simon tipped over the table!” or “Look at them, having fun on that boat!” as if it was our first time watching it, when in fact we watched MTV for just about every spare minute that we were at home. We all wanted to visit Sri Lanka (where the “Hungry Like the Wolf” video was filmed), and we all definitely wanted to be on that boat with them, singing about “Rio”. Of course, in those days there was no DVR and no ability to pause the tv at any given moment. Probably a good thing, as I’m certain that one or more of us would have totally fainted with excitement.

We all had our declared favorite band members, and mine were John Taylor and Simon LeBon. Hello Nurse! They were all kinds of handsome and hot, and I imagined myself someday running off with either one of them. Unfortunately, they were nowhere near Knoxville, Tennessee at that time. But I digress…

Over time, our love for the band got even stronger. We looked for their interviews, concert footage, and other coverage. We bought “Duran Duran” pins, t-shirts, and a couple of us even bought the type of hat that they wore sometimes. Our walls were lined with their posters. Listening to “Save A Prayer” almost became a real religious experience. We referred to them as “D squared” (you know, Duran Duran. Get it?).

We loved all of their music, but I remember that one of my favorite songs was always “New Religion”, which was not one of the huge Top 40 hits that they had. The lyrics were fun to learn, and there’s a sequence towards the end that I practiced and practiced until I got it right (if you clicked on the link to the video, it’s at 4:02. And I am proud to report that I can still sing every word of it, just as quickly as he does). I took a little pride in “New Religion”, like I was a better fan than most others because I loved a song that was just on the album/cassette rather than on the radio all the time.

And then we decided to form our own band. The name? New Oktober, after the song “Secret Oktober”. You won’t be surprised when I tell you that all of my friends picked the instrument they wanted to play, and I was made Band Manager and PR person. At the time I was a little annoyed because I wanted the “glory” of playing an instrument in the band, but not only did I have no instrument experience, but frankly I am an excellent manager. So the assignment fit, and it amuses me today when I think about how perfect that was. To report the story accurately, I have to divulge that I don’t think any of my friends actually HAD any of the instruments and, at best, some of them had probably marginal talent. But we made BIG PLANS, writing them in a Mead Spiral Notebook that said “New Oktober” on the cover.

So you get me. You get how big of a fan I was, and, okay, still am. (though I prefer the old music!)

Fast forward to the last couple of months. I discovered that Melissa is also a D Squared Super Fan. We go back and forth now and then, on Twitter, about how “JT is mine!” “No, mine!” We usually add crazy-long hashtags to our Duran Duran-related tweets, and we both end up in hysterics, sometimes even picking up the phone and calling the other one. We had one marathon conversation about JT and Simon in May, but Melissa tweets so much that I would have been sitting here for weeks trying to get back to it, so I will just show you an example of a back-and-forth we had the other day, regarding our BlogHer wardrobe. I said this, and then she replied with this. You get the idea.

Back in May, she wrote a post claiming that JT really is hers. (AS IF!) Read it here.

It got me thinking. (No, not about giving up JT for Melissa) We can have our cute little Twitter smackdowns about who is the bigger fan, and both of us can declare til the cows come home that #jtandsimonarereallymineandyoubetternotforgetit, but I finally realized that, thanks to our school-aged fantasies, there is enough D Squared to go around. And that makes me happy*.