Queer Eyes For the Straight Girls

On Friday, my roomie Sue (or, as she is commonly referred to among some of her new friends, “Cape Cod”) reallyreallyreally wanted to go to the Expo Hall to meet Carson Kressley. Though I was more excited about the idea of meeting Tim Gunn, I’m also a Carson fan and told her I’d be glad to go with her.

We showed up at the booth at 3:00; he was supposed to appear at 4:00. (Oh, I’m sorry…I guess people were in SESSIONS instead of waiting in line for celebrities. My bad.) Even the women at the Nikon booth (Nikon sponsored his appearance) told us we should go away for a while. So we did.

We returned at 3:30, feeling certain that there would be a crowd by then. Nope. So we became the leaders of the line. Time for a photo! 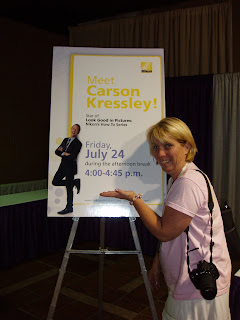 People started to get in line a few minutes later, and we chatted with a lovely woman who was at the conference promoting these (she brought some for Carson!). She was super nice.

As 4:00 got closer, a guy wandered over to us from the booth around the corner. (Sue, you will have to make corrections or additions if I don’t remember this properly) He asked us what we were waiting for, and when we told him, he said, “Who is Carson Kressley?”

Sue said, “He’s from ‘Queer Eye for the Straight Guy’.”

Then the guy replied and smiled mischievously, “Ooh! Well, I don’t know anything about queers.” He then waited a beat for Sue to register a look of horror on her face because she didn’t know how to respond. I realized that he is indeed gay, and we all laughed our butts off together. We introduced ourselves, and somehow the conversation got to the point where Sue told our new friend Gary that she’d been looking for a gay BFF.

He exclaimed, “Great! Then you can be my fag hag!” He scurried back to his booth and returned a few minutes later with his e-mail address. He’s local, so I think *I* probably have a better shot at being his fag hag than Sue does, but whatev.

I had to get a photo of the two new best buds: 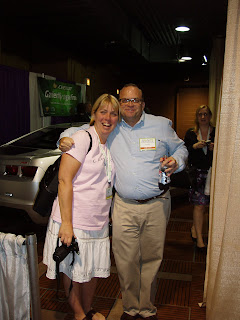 Now, this next thing I don’t want to make TOO big a deal out of because it definitely didn’t ruin our experience, but as we were waiting in the last few minutes, the crowds were moving closer to the table where Carson would be sitting. A woman was standing behind me and sort of to my left, and she kept inching up. Sue and I kept giving each other the eye and sort of repositioning ourselves. It seemed to us like the woman was making a move to get up front. Sue, the Yummie Tummies rep that was so nice, and I were quietly joking about how violent we would get if anyone cut in front of us.

And then it happened. As soon as Carson got settled, she scooted AROUND ME on the left and stepped up to the table first. SO ANNOYING. But you know what? Whatever. I had to let that go. We were still second and third. But shame on her. 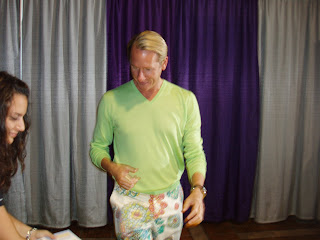 I walked up to him and asked him if I could come around to his side for a photo (I KNOW! Can you believe my boldness? I’m awesome), and he said, “Well of course you can!” So I did. 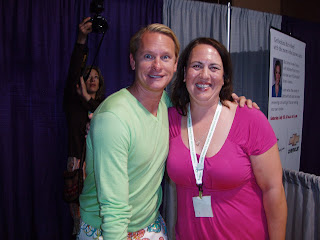 I made sure he knew that my name only has one S before he gave me his autograph, and then I moved on so Sue could have her turn: 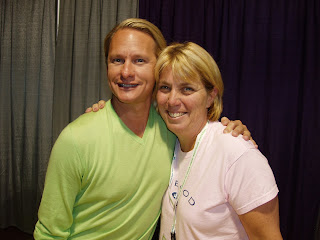 While Sue was talking to him, I took this photo… 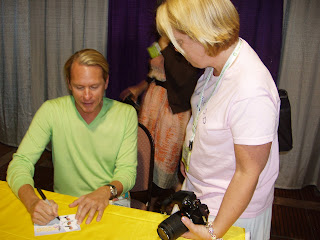 …and then stepped to the side, just in time to see our BFF Gary, SO HAPPY for Sue as she was meeting Carson. This is my favorite photo of all time that I’ve taken of someone who I’ve known for less than 15 minutes: 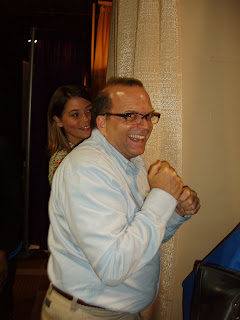 Later that evening, Sue and I were whisked away in a limo (yup!) to the Nikon VIP party. It was very glamorous and we had an awesome time. They had a guy doing chair massages, a woman doing makeup, and they had a yellow carpet (not red; yellow is Nikon’s color) set up for people to walk down and then pose for pictures in front of an event-themed backdrop, just like a “real celebrity”. 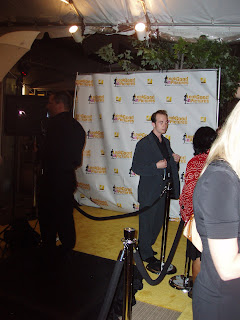 Carson was interviewed by a few very lucky bloggers. It was fun to watch. 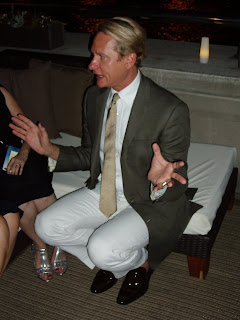 Sue and I walked the yellow carpet to meet with Carson again; since he had done a Nikon how-to series called “How to Look Good in Pictures”, he was consulting with everybody. We did a “before” photo, and then he looked at it on the monitor and told us what to do differently in order to look better. Then they snapped an “after”. It was quite exciting when Carson brushed my hair with his fingers as he said, “I can see we’re having a bad weather day, aren’t we?” (Oh CARSON. You’re so funny.) And then he told me that I squint my eyes too much when I smile. I told him that I can’t help it; I’m a very happy person. He said, “I get that. But concentrate on keeping your eyes open when you smile!”

I seriously would have smacked the crud out of anyone else, had they said those things to me. But I know this is just Carson’s way of delivering constructive criticism, and I appreciated it, truly.

One more photo with Carson for the road, and we let others have a turn as we PAR-TAYED! 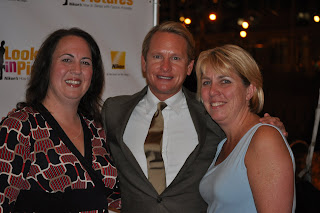 Such a fun and unforgettable evening!

Tagged as: Fanatics In The Best Sense of the Word, Yippee

Previous post: We Interrupt This Warm, Post-BlogHer Glow For a Rant…