I *LOVE* These Kinds of Issues

I have a new television show to be obsessed with. I’ve been anticipating its premiere for a while now, and it finally happened on Wednesday. It’s called “Michael & Michael Have Issues”, starring Michael Ian Black and Michael Showalter. 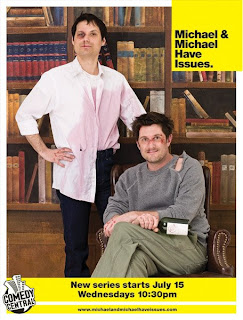 I’ve been a fan of the two since the days of “The State” on MTV (a post about that is coming up this week!). I started watching “The State” because I went to high school with one of the guys in the comedy troupe; he was two years behind me but made a huge splash onstage with my friends in the drama department; I was thrilled for his success right out of college when I discovered him appearing on MTV. Anyway, Black and Showalter make up two more of the 11-member team on “The State”, and it’s been thrilling to see their various projects over the years.

This new show by the Mikes was hysterical; I was hoping that it would live up to its massive advertising campaign, which included gems like these:

It totally did. What *is* the show? Well, it’s pure comedy, looking both at behind the scenes and in front of the camera on their show, mixed in with a sketch or two. Here’s the opener from the first episode:

That’s pretty much the flavor. Their competitiveness is hilarious from start to finish; I’ve already watched the episode three times, because that’s how I roll.

I checked into their blog today and discovered this, though. To summarize, if you’re not feeling up to clicking my link (ugh. really? I work so hard to put these links in!), they really need to get the word spread about this show in order to make more than the seven episodes they have. So I’m doing my job, because I think this one’s a keeper. So please? Won’t you watch? They are repeating the first episode tomorrow (Sunday, 7/19) night at 11:30 p.m. Eastern on Comedy Central, and the second episode airs on Wednesday, 7/22 at 10:30 p.m. Eastern.

Next post: When I Realized There’s Enough To Go Around