Note: This post is part of Fatherhood Friday at Dad Blogs, where all the cool kids are hanging out. (Moms are welcome over there!) I *might* even have a column called “Teen Angst” there. Welcome to my visitors from DB; thanks for stopping in!

As I left to walk the dog the other day, I noticed that the mail truck had just stopped at my house. I grabbed the mail and discovered that the younger boy received his freshman schedule. Both of my “babies” will be in high school this year. I can’t believe it.

I put the mail in the garage and Roxie and I set off on our journey to the park, which is our long walk route. I didn’t wear my iPod like I usually do; sometimes I just enjoy thinking and really paying attention to what’s around us, taking in the scenery.

As we walked, I thought about the boys. The younger boy is so very excited about going to high school this year; it’s nice to see him looking forward to school, because he hasn’t in such a very long time. He’s looking forward to the change in venue AND to the brand-new high school he’ll be attending. He’s also ready to earn his guitar lessons back, which I had to pull him from due to some grade issues in April. He has chosen two electives which we’re both thrilled about, German I and Introduction to Foods. I think he chose German both because he is truly interested in it AND because he’ll be able to practice it with his brother and me. The foods class? He LOVES to cook. It will be interesting to see this interest blossom over the next couple of years.

The older boy has just come off of a hellish Junior year, and in nine-and-a-half months he’ll be graduating. When I was his age, I was engaged. (To his father. No worries! It all worked out!) He currently has no girlfriend, but he’s working on it. He is looking forward to this year because he’s got some cool electives (like Auto Mechanics) that he hadn’t had room in his schedule for until now. And hopefully, he’ll be working. I’ve read that teens his age do start to pull away from the family a little bit–even when everyone gets along just fine–as a natural part of their mental preparation to move on. I feel that happening sometimes and even though I expect it, it makes me a little sad.

I try to focus, during all of this growing up that’s going on, on the positives. We have raised super kids. They’ll be great when they eventually go out on their own, and if they need help all they’ll have to do is call. Jim and I have a whole lot of life on our own that we look forward to, including some traveling if all goes well down the road. We have conducted our marriage (and worked on it!) in such a way that we still deeply love each other–and, in fact, are still in love–and we look forward to being just the two of us again when the time is right.

I’m not normally a weepy, sentimental type of mom, bemoaning how I don’t want my kids to ever grow up. In fact, Jim and I have taken our duty as parents very seriously; our mission from the very beginning was to have a couple of awesome kids, have a great time with them while raising them to be loving, caring, productive, independent human beings, and then…get them out on their own. And then? Yippeeeee!

Yeah, that’s easy to say when they’re little. Now? Ooh. That’s a tough one. I’m starting to have the teensiest bit of anxiety at the thought of them leaving our home for another place to live on their life journeys, because I happen to like my kids alot. And that could be considered amazing, because one of them is 14 and in the throes of finding out who he is as a teenager and what his place is among his friends and at school, and the other one is 17, on the cusp of his Senior year, trying to get a job, trying to search for college, and wishing that a car would magically appear before his eyes since he can’t seem to make money fast enough (yet) to buy one for himself. Those kinds of issues can make teenagers a little moody and hard to enjoy. But I still like them. They’ve grown into amazing young men, as you know from reading the Scrawl.

On my walk, I saw some small children playing on the swingsets, slides, and climbers. Their parents were right there at their sides, playing with them, talking to them, encouraging them. Juice boxes were being opened, some kids were giggling, some kids were calling “Mom!! Watch me!”, and some were running up to their parents, hugging them just because they felt the urge. I wanted to stop for a moment and tell those parents that I hoped they would take a moment or two to really absorb what was happening, because it goes by so fast. 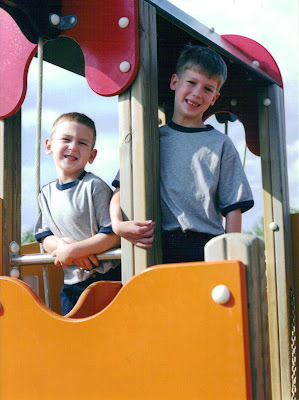 Next post: How To Make A Duct Tape Wallet

Previous post: My Car Stereo Had An Aversion To Kids’ Music. (Wait, That Was Me.)