I have gone through many stages in my life as far as friendships go; I think my experiences are pretty typical of the average woman but who knows…I may be an unusual case. What it boils down to for me is that friendships have an ebb and a flow to them. Though you might have a few “Forever Friends”, people generally come into and go out of your life for a reason, sometimes for support, sometimes to be supported, sometimes to teach us something, and sometimes for reasons unknown to us.

When Jim and I were first married, he was in the Navy. I had many friends in the other Navy wives who stuck together and supported each other when the guys were out to sea, and I was supertight with my crazy-in-a-good-way, perfect cheering, middle-of-the-night ballet dancing, plumbing expertise-impaired partner, Dawn.

We eventually moved to Wisconsin and started our family, and my friends became the other young moms in my neighborhood and at the little women’s-only health club where I worked in the nursery.

Then we moved to this town and I was good friends with lots of moms in the neighborhood; we had a babysitting co-op, a scrapbooking group, and occasional nights out.

When the older boy started elementary school, my friends were the other moms from his class, especially my co-roommoms: we could plan some “mean” class parties.

A couple of years went by and I became very close with someone who, for a couple of years, was my best friend. I had lots and lots of acquaintances and people who I sort of considered friends, but she was the main person I spent time with. That relationship ended seven years ago, badly. It was a really, really stressful time but I laugh now because I consider it the biggest “breakup” of my life, and it was with a woman. (Don’t read between the lines. It’s exactly as I wrote it, nothing more.) It changed my life forever. For the better, actually. I might post about it someday.

Since then, the kids have grown older (they tend to do that) and we’ve been busier (that happens) and my time for in-person friendships has really dwindled down to “not much”. Everyone who is in my “stage” with kids the same age is just as busy, and trying to pick a date for getting together that fits into the schedules of all parties involved is nearly impossible, so for the past few years I can say that I have many, many friends but hardly any who I spend actual time with.

But friendships take time and effort, and sometimes a shuffling around of your schedule. A couple of years ago I started talking to someone who is also a member at my temple. Debbie has been pretty involved there, like me, but I didn’t know her very well. We had some time to chat around the time of our Purim Carnival and after I went home, I thought, “Hmm. I should see if she wants to go to lunch or something.”

The next time I saw her, I said something like, “I almost feel like I’m asking you out on a date, but I have really enjoyed talking to you lately and wondered if you might want to meet for lunch?”

As it turned out, she had been wondering the same thing. We both knew lots of ladies at the temple but didn’t do much socially outside of the temple and thought it would be fun. So we met for lunch shortly after that and became good friends! She is such a lovely person; she’s ALWAYS smiling, she’s really thoughtful, she’s a fabulous mom, and a great friend. We’ve had some fun lunches together, and many hours have been spent on the phone. Our individual schedules have gotten absolutely crazed over the past nine months or so, but we know the other is just a phone call away.

Recently, her hubby got a job far away from here. SUCH a bummer. Though I know we’ll stay in touch and be friends no matter where we live, she’s going to leave a big hole around here.

I arranged for about twenty of her friends from the temple to get together last night at a pizza place so she could spend some time with everybody before she leaves town. When I spoke to her in the afternoon, she was adamant that she wasn’t saying goodbye to anybody. She said, “I’m just going to say ‘See you later!'”

I pointed out that she WILL see us later, because they’re coming back in December for her daughter’s Bat Mitzvah. “I know,” she said, “but still…”

And so, A “See You Later” party it was. Get a bunch of women in one room, sitting around a huge table, and the noise is deafening. Everyone was talking and laughing; you could be involved in five conversations at once. It was crazy, loud, totally overstimulating…and really fun. 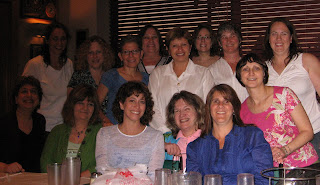 I made a lovely cake for dessert: 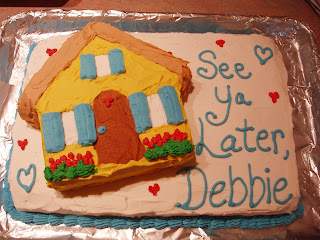 Of course it was a rainbow cake! 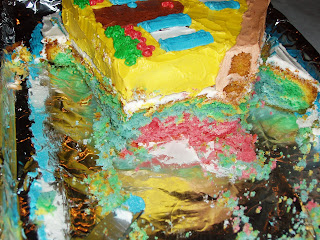 Although we talked about Debbie’s plans in her new town, the evening was really upbeat: just a bunch of friends hanging out together.

Debbie went right home and put her photos on her Facebook page; comments started being posted immediately. One in particular made me smile, because it included something I remember from when I was a girl scout, something I had been thinking about all evening:

Make new friends, but keep the old
One is silver and the other gold. 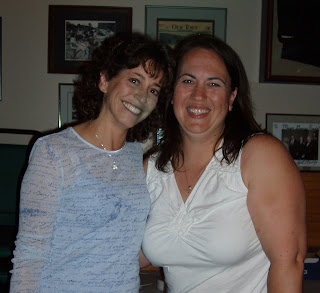