My First Rejection (or, "They Can’t All Be Gems, You Know!")

I consider myself to have been a pretty normal teenaged girl when it came to having raging crushes on rock stars, tv stars, and movie stars.

I also, as many teenaged girls do, wrote fan letters on occasion. I remember writing to Charlene Tilton once, to tell her how much I loved “Dallas”. I was thrilled to receive, a couple of months later, an original cast photo that was autographed by every single stinking one of them, including Jock and Ellie*.

Much later, when I was crazy about the band Berlin, I wrote a fan letter to John Crawford, who I totally adored. 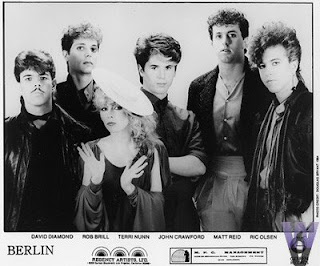 It won’t surprise you at all, because of my quirky, issue-ridden personality, that I included a postage stamp for him to use when writing me back. What will surprise you is that he did write me back. Personally. On notebook paper. He even told me that he could certainly afford a stamp to put on his own letter. His letter was great. I wrote him back immediately, asking questions about the band. He wrote back. I think I ended up with four letters from him, in his own hand. It was thrilling.

I wrote a very different type of fan letter in 1984. I still cringe about it. There was a model/actor named Jon-Erik Hexum, who I thought was totally awesome (dude). Many of you younger folks have no idea who I’m talking about, so go on, click here. He died while shooting his show “Cover Up”; it was a terrible accident which is detailed at that link.

I was so sad about it that I decided to write a letter to People magazine, and hoped that they would publish it on their reader letter page. This is sort of how my letter went:

Whyyyyyyy? Whyyyyyy did this have to happen to Jon Erik Hexum??? What a loss to the entertainment community!!!! I just don’t understand whyyyyy this had to happen to him! He had such a bright future! Whyyyyyyyyyyyyyyyyyyyy???????**

A couple of weeks later, I got a little white postcard from People magazine, thanking me for my letter but saying that they couldn’t use it.

I was crushed all over again. I couldn’t understand why the magazine wouldn’t want to use my letter. After all, I was one of his biggest fans. It took me a long time to get over that one.

But I did. Over time I was able to laugh about the idiocy of my letter and enjoy the fact that my first rejection as a writer came from People magazine. Many more rejections would follow, but that one means the most.

*I can’t imagine what that thing would be worth today at some Dallas Fan Convention. Unfortunately, I think I got rid of it eons ago. Idiot.

**Okay, not my exact words. But you get the flavor of it.

Next post: No Need To Be Impressed. YOU Can Make Them, Too!