Yesterday was, as expected, a blast. But it was about 10,000 times better than I could have ever imagined. A mere blog post won’t even capture it properly; you truly had to be there. Momo did her own summary. The pictures would have spoken for themselves had it not been for the adorable RHYMING VERSE she used. She’s good. Really good.

But I’ll try to give you a taste of it.

First, the road trip to the Land of Momo. My van-mates? The lovely Weaselmomma: 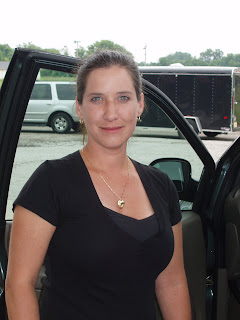 and the equally lovely Surprised Mom: 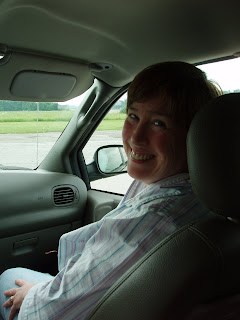 Honestly, if you happen to be riding across the midwest (or where ever) in the middle seat of a van, the way to go is announce to all of your friends that you’ll be on Twitter the majority of the time, and ask them to keep you company. Not only does it make time fly by, but the laughter is loud and long. Thank you SO MUCH to all of you who kept us in hysterics! Tell you what; I have “favorited” many of the tweets so you can go over much of the back and forth conversation on the trip (in order). Go to my twitter page and click “favorites”, in the right column. Once you get there, scroll (without reading tweets yet!) down to the bottom of the page and click “more”. Do that three times until you get to the first tweet on the trip, which is June 14 at 6:18 a.m. Then read from that point UP, and you’ll get the flavor of our trip.

In between tweets, I was crafting. See? 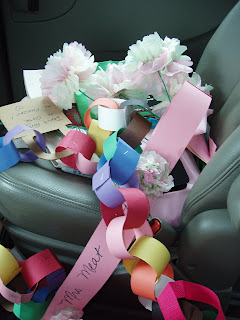 Before we left, I made the four of us each a commemorative tote bag. (It’s a sickness.) 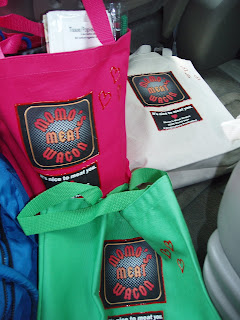 Here’s Momo’s newly-stocked freezer in all its glory. She was excited to stock it, and the three of us were radiating with the MANY, MANY bloggers that made this trip possible. (We were just the lucky delivery girls–Meat Maidens, if you will–but were representing a tiny corner of the blogosphere!) 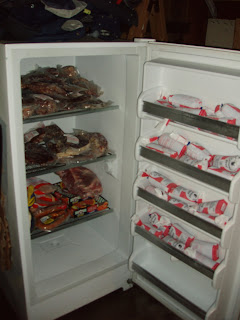 One of the things I made in the car was a “padlock and chain” to put on the freezer, so Momo’s daughter–or anyone else, for that matter–wouldn’t forget to close it. 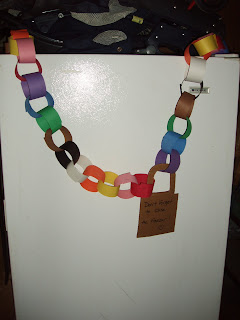 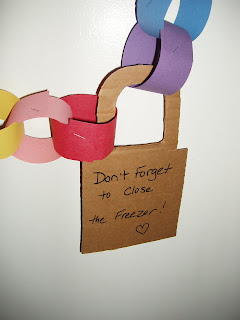 I also brought Momo a tiara and made her some tissue paper flowers and a “Mrs. Meat 2009” sash. Because if ANYONE deserves the Mrs. Meat title this year, it’d be her. 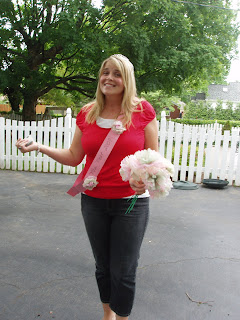 We put away the meat first. Next item on the agenda, to have Momo’s neighbors take a photo of us. 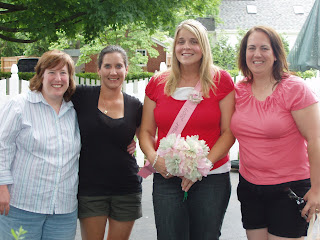 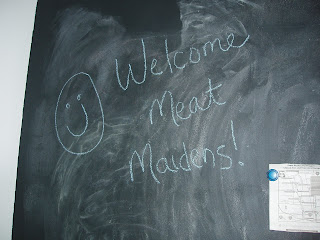 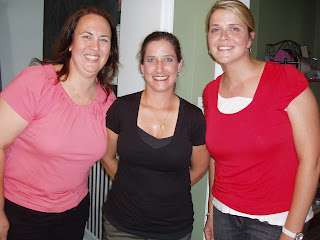 We got to meet Momo’s sister, her kids (LOVE THEM), Dado Fali, and of course, Daisy and Blue. I wanted to bring them home with me but I value my marriage and my new IRL friendship with Momo too much to try and pull a fast one there. 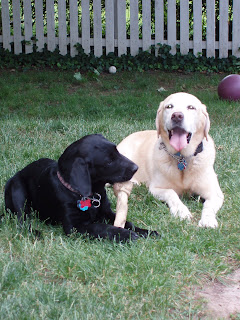 And of course there had to be some goofy photos: 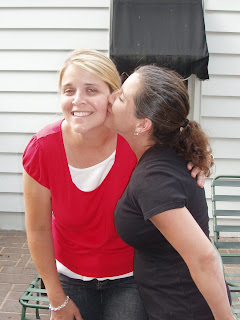 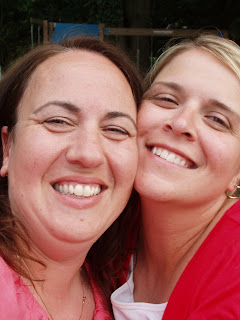 We hated to leave. Seriously. Hated it. But had to. 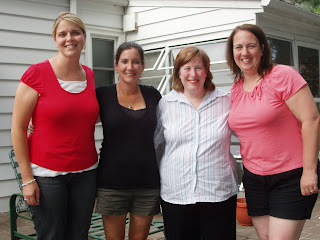 I think Weaselmomma is writing about this so I’ll just mention it; we felt like we had known Momo for years when we met her. It was an amazing thing. You know, last month Weaselmomma, Momo, Tom and I blunked Nukedad. After the bleeding stopped, Nukedad sent us a little note thanking us for the abuse. I hope he doesn’t mind my quoting from it, but it sort of sums up yesterday. He said, “It’s strange; I’ve never met any of you, never even talked on the phone with you, but I feel that if we ever met in person, that the conversation and company would be that of old, trusted friends; heartfelt and meaningful.”

Nukedad, I can tell you that you’re right. One of these days we’re going to meet you and Tom in person and it’s going to be just as memorable. Blogger friendships are an interesting sort of phenomenon.

All in all, an out-of-this-world day. I have to thank Tom so much for getting the ball rolling on this. Without his brilliance, this never would have happened. We called him on the way home (and then I thought, “CRAP! Should’ve called him from Momo’s!!!) to tell him a little bit about our trip and totally wish he could have come too. (It would have been a couple days out of the way to pick him up, though…)

Thanks to EVERYBODY for all your support, whether you donated, read our accounts, tweeted, or whatever. It was all appreciated.

Next post: My First Rejection (or, "They Can’t All Be Gems, You Know!")