It Only Took Twenty-Eight Years…

On Friday, I did myself proud.

As many of you know, I write feature articles for a nail salon industry magazine. Every July, my fabulous editor asks her writers to propose ideas for the following year. Last year as a part of my 2009 article proposal, I came up with the idea of interviewing the host of one of my favorite business makeover shows in conjunction with an article about salon makeovers. (Click here to hear his glorious British accent and see what his personality, full of infectious excitement, is like. He’s awesome!) I let my editor know that I would do my best to locate his PR people and get an interview secured while she was considering my article idea. (I figured, worst case scenario, if she didn’t like my idea and I already had the interview arranged, I could write a differently-angled article and pitch it elsewhere. As it turned out, she loved the idea.) It was super-easy to get connected with the person at the network who could arrange the interview. In fact, my contact at the network said to me, “Are you in LA? I could arrange a sit-down.” WHAT? I was tempted to look at the family finances and check into swinging the cost of a ticket just so I could say, “Yes, I’ll be in LA in two months, how about then?” But alas, I came to my senses rather quickly and let him know that it would have to be a phone call. He told me that we’d schedule it closer to when I needed to write the article, and we said goodbye for now, agreeing to reconnect in June, this month.

My excitement over this huge “get” (isn’t that what Brian Williams, and all of those big-time journalists call their exclusive interviews?) was tremendous. Until I realized one thing.

I am a complete idiot when around celebrities.

Here’s some history for you.

We lived in Texas for two years when I was a kid. At some point around 1980-81ish, my mom, my sister Julesie and I were at the Olla Podrida shopping center in Dallas (which I just found out via Google, no longer exists) when we saw Lisa Whelchel, who played Blair on “The Facts of Life”. (She’s from the Dallas/Ft. Worth area) 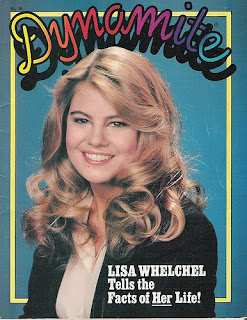 This was when the show was huge, and we were huge fans. Of course our mom was all for running over to her to say hello and ask for an autograph or something. I only remember a few things about the moments that followed.

We did go over to her.

My mom said, “Are you Lisa Whelchel from ‘The Facts of Life?'”

Lisa said, “Yes Ma’am, I am.” (They raise polite children in Texas. I have always remembered how polite she was. It was very impressive!)

And that’s where I sort of blacked out, doing my best impression of Cindy Brady when she went on that TV Trivia show and froze once she saw the light on top of the camera, indicating she was “On Air”:

(Sorry about the photo size; it was all I could find online)

I literally don’t remember anything else about that whole exchange, except that even at age seven, my sister was completely at ease with someone we idolized.

Completely. Not. An. Idiot.

Even though I can’t remember specifics, I’m fairly certain that I could tell you that she was downright polished when having this conversation with Lisa Whelchel and it would be true.

Fast forward to another experience with someone we both adore, during which I was a (say it with me!) Complete Idiot.

David Sedaris, a extraordinarily gifted humorist, came to Chicago to do a reading at the Chicago Theater. Those of you who have no idea who he is are really missing out. Check him out:

Anyway, whenever David does readings, whether it’s in a big theater like that night or in small bookstores, he stays afterward to sign books and chat with the fans. On that night, Julesie and I were excited to get in the book signing line. (This, by the way, would be the first of three Sedaris meetings. We are groupies.) As we inched closer and closer to the table where he sat, tirelessly signing and chatting (it seemed like most everybody in the theater was sticking around!), I grew more nervous. I felt myself freezing up again! But the worst was yet to come. My loved ones ridicule me for it We still talk about it to this very day.

It was our turn to approach, and Julesie said hello. I stood there, silently. I hope I was smiling but to be honest, think I probably looked like this:

I handed him my book (“Naked”: it’s one of his best ones! Go get it and read it!) to sign and as he flipped it open, a greeting card fell out. It was a goofy card with a photo on the front of two cats that looked like they were talking to each other. Embarrassed that the card fell out (why? no idea), I stammered, “Uh, that card is from my friend. And uh, I don’t like cats.”

Those four little words lingered in the air for what seemed like an hour.

I can’t remember what he said (ask Julesie: she probably does), but he then signed my book and said, “Would you like something from my F*ck It Bucket?*” We took a piece of candy and made our way out. His signature in my book will be a forever-reminder of this experience, as if I needed one: 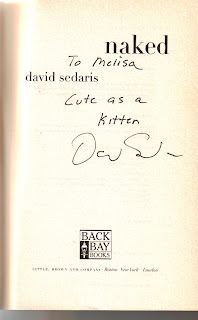 That candy is long gone, but the memory of how I told David Sedaris that I don’t like cats will last a lifetime.

I have done progressively better with David, and I believe that on the next visit I will feel confident enough to ask him to meet Julesie and I for a late-night book discussion over Starbucks.

So, getting back to Friday…I was concerned that my big interview would be a big flop because of my idiotic tendencies. I wasn’t nervous until ten minutes before expecting the call, and then my hands got a little sweaty and my heart raced. When the phone rang, I answered (yes, I ANSWERED!), and we were on our way. My having to write down everything he said made my nervousness disappear: there was no room for it! Although I am no Barbara Walters, I got my questions out and we had some great conversation. After twenty-five minutes, it was time for me to get off the phone and head over to the younger boy’s Eighth Grade RECOGNITION ceremony, and he back to his clients. I thanked him profusely for his time and he replied, “Anytime, Darlin’. Anytime!”

I think at my ripe old age of forty, I may have finally realized that, deep down, celebrities are exactly like “real people”; they just have a different job. It’s about time.

*At another booksigning, he was offering everyone a two-pack of Tylenol, because we had been standing in line for so long.

Tagged as: Current TV Obsessions, Fanatics In The Best Sense of the Word, Yippee