Going Balls-Out On His Birthday

When the boys were little, I made them rainbow cakes just as I do these days. The difference back then was that I knew what the cake theme would be for weeks. In some cases, months. (’cause that’s how I roll) Their birthday parties were planned according to a theme down to the very last detail, and I enjoyed every minute of doing it. We had parties in the following themes: rocketships, cars, Blue’s Clues, Magic School Bus, trains, and many more than my aged mind cannot remember at this moment. They were all glorious.

As they got older, birthdays didn’t become any less important but, post-Bar Mitzvah, we just didn’t do the parties anymore. The cake became the main “thing”. And truthfully? My kids don’t really care (I don’t think, anyway) what the cake looks like. I, however, enjoy the opportunity to flex my creative muscles. I have a huge Rubbermaid container full of Wilton cake pans in various shapes and sizes; I can create just about anything.

For the older boy’s 17th birthday yesterday, I was having a hard time deciding what to do about the cake. I used a rectangle pan when I baked it on Saturday night, figuring the inspiration would hit me eventually as far as the decorating was concerned.

As late as noon yesterday, I still had no clue. Jim and I sat in the living room, trying to figure it out. I could put a car on it…nah, too cliche’. I could put an iPod on it…nah again. Jim said, “How about you just write ‘Happy Birthday *insert name here*’?”

I sat for a moment, trying to think of things that the older boy likes. A lacrosse-themed cake? Too tough. A cake with a replica of his Boy Scout Eagle project on it? Stupid idea for a birthday.

And then it came to me. Balls.

All four of us are die-hard fans of the show “Wipeout”. We have been fans since Day 1, when it started airing last summer. It is a competition that starts with 24 people (all competing for a spot in the next round, until finally there is one winner) who run through crazy obstacle courses and, more likely than not, falling on their face/a$$/stomach/whatever along the way. The action is made more colorful with commentary by John Anderson and John Henson (one of our favorites from “Talk Soup”, back in the day) It is mindless, hilarious, and painful to watch. We love it. The most well-known element of the show is the Big Balls obstacle, which involves four, uh, huge balls that each contestant has to cross without falling off. Like this:

At the end of every show, John Henson says, “Goodnight…and Big Balls.”

And there you have it, the theme I decided on for the cake. 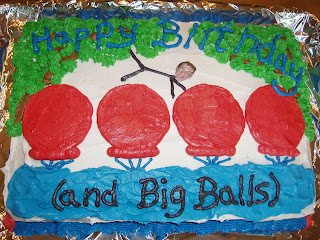 I added a little obstacle of his very own (trick candles)… 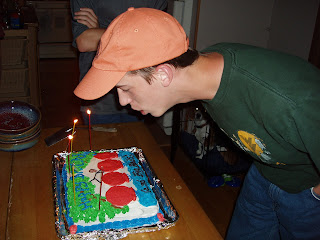 One last funny: when I asked everyone which piece they wanted (corner, etc.), Julesie picked this one: 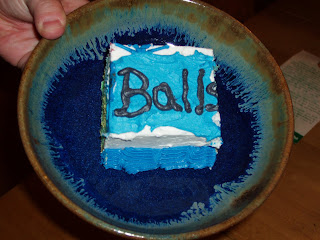 In case you were wondering, the cake was, of course, delicious.