This weekend, the Lacrosse season ended (except for next week’s banquet, but that doesn’t really count now, does it?). The older boy’s JV team played in the division tournament and won the first game but lost the second, which meant that they weren’t able to play the final. No biggie. They had an absolutely awesome season, losing only three games and winning the rest. The boy, tending the goal full-time this year after being only a back-up goalie and most-of-the-time midfielder last year, made huge leaps in improvement from eight weeks ago. He really blossomed into the position and actually still likes it! (You couldn’t pay me to be a goalie!)

The first game in Saturday’s tournament was our second go-around against our rival high school. This high school is, until next year when the new school opens, the only other high school in our district. We are in the same town, but there are many differences between us, if you lump everyone from each school together in a big stereotype, which you shouldn’t do…but we all do (at a sporting event, anyway).

The first time we played them, we found their players’ sense of good sportsmanship to be very much missing. They were obnoxious. They were even wise-a$$es to the refs. The parents, weren’t much better. On the same side of the field and mixed in with our parents, they were loudly chatting with each other about how “loud” we were in rooting for our team, like that was a bad thing. For these reasons, I totally didn’t even mind–heck, I ENJOYED–that the younger boy wore a bracelet that the older boy bought at his school for a buck: 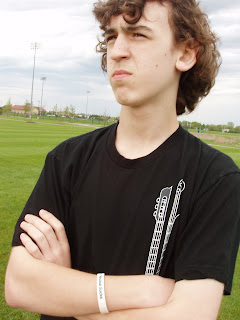 Anyway, between the rivalry and the other team’s conceited and totally over-the-top obnoxious behavior, we wanted to win this one really badly. And we did, 6 to 3. Boy, were they ticked off about it, too.

When I heard that we were playing them first in Saturday’s tournament, I thought, “Uh-oh, they’re still going to be mad as hornets about the last one.” And they were.

The score stayed close and the game was a real nailbiter. In the last minute, we were winning, 11 to 10. And then, something really cool happened that I got on video. (crappy video since I used my digital camera–no zoom function on the video setting–but still on video nonetheless)

My boy stopped a shot that would have tied up the score, forcing an overtime. He cleared it down the field and, by the time the other team got it back towards his end, game over. It was so awesome! Check out my crappy video. In the first couple of seconds you’ll hear the excitement about him stopping the shot, then a few seconds later you’ll hear the horn, leading to my favorite part of the game, where his teammates all run to him at the end and do the high fiving thing. At this game, they actually picked him up!

We may have lost that second game on Saturday, but this is the game that will end the season in my mind. Great job, Warriors! 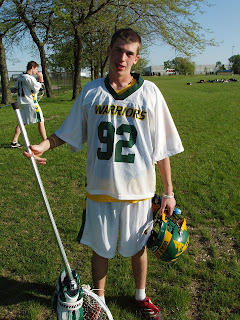