A Green Letter Day, The Sequel

You might remember that, this time last year, after a great first season ever of playing mainly the midfield position in his first sport ever (Lacrosse), the older boy won the award for “Most Improved Player” on the JV team, which was presented at the end-of-year banquet.

This year, as you know, he played the goalie position. He was playing 1000% times better at the end of the season than how he started, so we thought it was a real possibility that he would get the award again. How awesome would that be?? He actually told me a couple of weeks ago that he had a great “joke” in the event that he won again.

“I’m going to go up there, accept my award, and tell Coach that maybe next year I’ll play long stick middie and win for THAT position too. Should I say that?”

As it turned out, he DID win. Hip hip hooray! Pretty awesome, you know?

Unfortunately, I was in the next room counting votes for our board elections when he was presented with it, but Jim and the younger boy were there to see it. 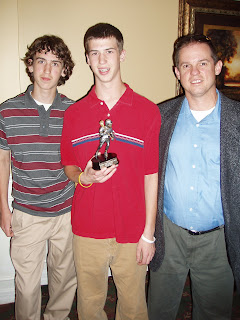 When I spoke to him after the banquet, I cringed and braced myself for the answer when I asked him if he told his “joke” to the coach. Thank goodness, he didn’t.

And thank goodness he has no interest whatsoever in playing anything but goalie next year. We’ve spent enough on equipment for him in the past year to last a while.

Next year? We’ll have two players in the house. I’d better go look for some change under the couch cushions. We’re gonna need every penny. 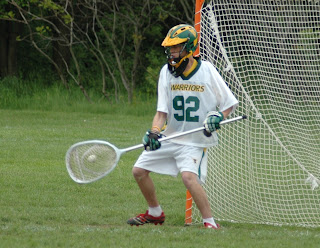