Wayne and I Miss You, Spindle!

I’m currently trying to squeeze early-morning time into my schedule (for three weeks I’ve dragged my butt out of bed at 5:30 a.m.) to get some writing done, on this here blog, on magazine articles, and on a book I’ve been working on (and off and on and off and on) for two years. In looking through some photo folders on my computer I found this one, of the Spindle: 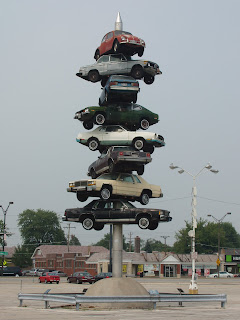 The Spindle, you might recall, was internationally famous for appearing in the movie “Wayne’s World”, but locally it was famous for just being a landmark. The boys and I made a visit to the Spindle in the summer of 2007. Its home was a shopping center called Cermak Plaza, located in Berwyn, which is another suburb located between where I’m at and the city of Chicago. Yes, it was rusty and covered in bird poop, and the entire shopping center, which many don’t know had many other art installations scattered all over the place, was very run down compared to what it looked like in its heyday, but it was a cool field trip.

At that time, a group of people had gathered to “Save the Spindle”; the shopping center wanted to get rid of it. There was a big online campaign to either keep it there or find someone who would take it and display it elsewhere. I googled “Save the Spindle” a few minutes ago and discovered that although it had been listed on eBay for $50,000 (plus the cost of dismantling and shipping), there were no takers and indeed, the Spindle was removed in the middle of the night last summer.

I’m sad. It’s too bad when a piece of classic Americana goes by the wayside. At least I’ve got the memories…