The Day That It Paid Off To Be Forty

Last week I had a moment when I was so excited to be forty, and I wanted to share it with you.

Normally, though I had a bit of angst when I turned the Big 4-0 in November, I don’t even think about my numerical age because I always feel so much younger anyway. It’s just a number and doesn’t really hold much importance. Until Saturday.

I took the younger boy out to lunch after his last band concert. We went to a new burger place, a “fast casual” restaurant. Orders are placed at the counter but they give you a number to put on your table; a server delivers your meal when it’s ready.

As my order-taker grabbed a table number for us and put it on the counter in front of me, I saw that it was the number “40” and didn’t think anything about it. I kept reading the sign, though, because this restaurant has witty signage all over the place and they are sort of known for friendly “smart-a$$ed-ness” (Nukedad, that one’s for you!).

It said, “If you are the same age as this card, you win a FREE MEAL.” 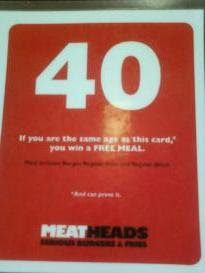 It took me about two-thirds of a quarter of a nanosecond to remember that I AM forty, and I COULD prove it, as the sign warned.

Totally channeling my mother, whose excitement on winning something is unmatched by anyone I’ve ever seen no matter what the prize*, I picked up the card off the counter and said, “OHMYGOD, I AM FORTY!!!!”

The guy behind the counter next to her said, “No you’re not! (probably pouring it on for my benefit) Do you have a license?”

“Of course I do!” I said. I showed them my driver’s license and was presented with a card for a free meal on my next visit.

On the way to the table, I was all “YESSSSS! Free food! Isn’t that awesome?”

My son, who is fourteen and in that special teen stage where it’s fun to be a buzzkill, grinned and said, “Mom, you basically got free food for being old.”

I said, “HEY, I could’ve won if I were any age that matched that card! Good thing I just won free food or I’d be really ticked at you right now! Free food! Wooo hoooo!” (at that point I had to act really excited about it, you know, to get back at him for his comment)

When our food was delivered to the table by another employee, we thanked him and he said, “No, thank YOU. And congratulations on being forty!”

That was weird of him to say in that way. But I didn’t care. I won free food. Yay me!

*Once we went to a Client Appreciation party for the clients of a travel agency that my friend’s family owned, and in the door prize drawing my mom won one of those old-style airline promo bags sort of like these, and you would have thought it was a million bucks. She started shrieking from our table in the back corner as if she was Tennessee’s newest millionaire. But she wasn’t. It was just a bag. I guess if I look at it in different way, it’s just that my mom just really appreciates stuff. (Private note to Julesie: Reminds me of another post about stuff I have to do. ha ha)