Today, as if I’m telling you something you didn’t know, is Memorial Day. The majority of people are off from work, the kids stay home from school, government offices and banks are closed, and we Americans typically celebrate by gorging on barbecued foods, various kinds of salads, and lots of desserts. Great day, right?

Hopefully everyone will remember why we celebrate this holiday, and hopefully parents will teach their children that it’s more than just a day off. On Memorial Day, we remember those who fought and died for the very freedoms that we are enjoying today and everyday.

As has been the tradition in our house for the last several years, the boys will be marching in our town’s Memorial Day Parade with many other boys from their scout troop. Our troop has the extreme honor of escorting the vintage cars that carry the Gold Star Families: families who have lost a loved one in combat. Here’s a photo from the 2007 parade: 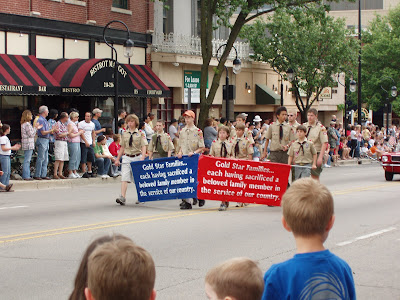 Although the boys grumble just a little bit at first about having to get up, put the uniform on, and spend 2-3 hours in the crowded streets of our downtown, they always realize quickly before they start that what they are doing is important and an honor. I expect them to participate each year that our troop is asked to do it. Frankly, it’s the least they can do.

We have a reminder in our very own neighborhood on a daily basis that freedom isn’t free. One of our neighbors lost their son in combat five years ago. I remember the day the news trucks were parked outside their house to interview them. I learned that that they have lived in our neighborhood for somewhere around thirty years. Their son, David, went to the neighborhood elementary school; in fact, one of his teachers still works there (and taught both of my boys). He was an Eagle Scout.

Our neighborhood reached out to his parents and eventually pulled together to get approval from our township to make a vacant lot here in the neighborhood into a park named for David. When Jim was the younger boy’s cub scout leader, they chose (as their year-end project) to make a bench for the park. It’s still there. Since then, an official sign has gone up, more benches have been placed, and a huge group of neighbors (including David’s parents) landscaped this gorgeous little park. 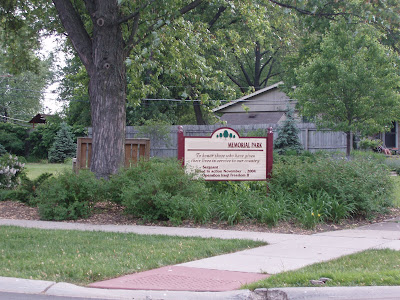 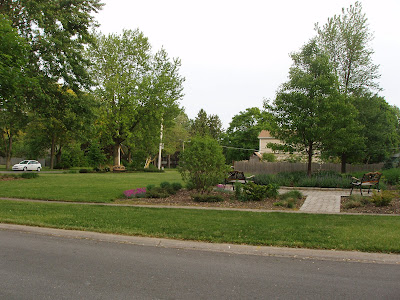 The park stands as a daily reminder to all of us of David’s sacrifice for our country, and shows what people can accomplish when they pull together with a plan. David’s parents often take walks around the neighborhood and I like to think that going to that park, sitting on a bench and reflecting upon their son brings them just a few moments of peace.

Enjoy your Memorial Day, and give your kids an extra squeeze today!