Before the boys came along*, Jim and I had big plans for how our family was going to “be”. We would have a couple of kids, thoroughly enjoy the heck out of them until the day they turned eighteen, and then they were out. OUT.

When they were little, they would ask for things that we were not going to give them. Just to name a few?

We used to tell them, “When you grow up and get your own place, you can have *insert denied item here*.

On their birthdays when they were between the ages of about six and ten, they’d announce to anyone who’d listen that “It’s my birthday today! Only twelve years left, and then I’m out of the house!” (No joke.)

It was all in good fun, really.

Until the last couple of years, when I suddenly realized that seriously, my kids are going to be out of the house one of these days. Sooner rather than later. I have almost completed my job as an in-house Mom. Looking back to who I was before these boys “came along”, I know there was not one iota of expectation that I would get to this point and feel…sad. All of these years, our family experience, our boys who have “come along” so very nicely…well, let’s just say that I’ve experienced tremendous growth as a person because of my kids. They’re great people. I adore being with them.

And THAT is why, my friends, I am totally freaked out by this crate of file folders, because they represent a major step, our next step with the Older Boy. 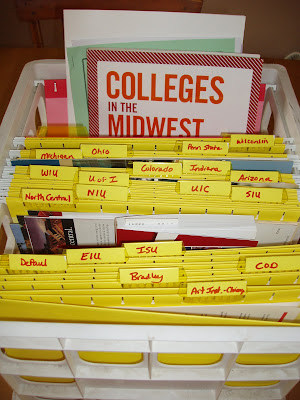 *Isn’t it funny when people use the phrase “came along” when referring to babies being born? It’s like, rather than actually being pushed through the birth canal via a totally uncomfortable experience, they just happily skipped through the hospital hall, stopping at the correct door, knocking, and announcing their own arrival. Anyway, you know what I mean.

Next post: THIS, People, Is Why The Internet Exists!