I made it quite clear in a post I wrote before I left town that a candy pilgrimage was in order for this trip to NYC, but I had no idea what a huge part candy would actually play over the three and a half days. (There are worse things!)

We spent lots of time getting up close and personal to candy in NYC. Times Square is home to the Hershey Store and M&M World. See? There’s Hershey in the background, on the next block over from M&M World. 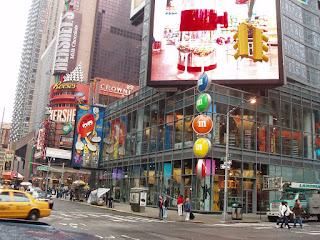 We visited the Hershey store only long enough to buy a candy snack pack for our double-decker bus tour (more on that in another post!); we didn’t stay long because, frankly, we have a Hershey store in Chicago and we’ve been there, done that.

M&M World? Wow. Totally different story. Whether you are just an average M&M eater with questions or a raving lunatic like Sue from As Cape Cod Turns (ask her, she’ll admit it!), you will love this store. And really, when a store has an enormous lighted sign in Times Square, not only telling you it’s “Now Open” 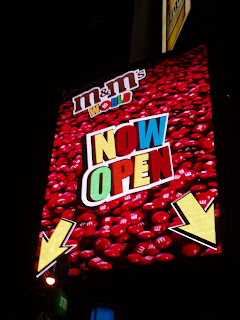 but to “Come Inside!”…shouldn’t you? 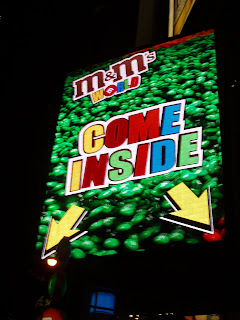 We did. More than once, actually. The store is amazing. It’s three giant floors of EVERYTHING you could ever want in M&Ms (including souvenir pennies!) As you enter, you’re greeted by the Blue M&M, dressed in his best John Travolta in “Saturday Night Fever” finery. 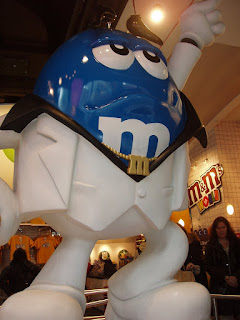 Of course Red, Yellow, and Green are all over the place too, in various incarnations. My favorite was Ms. Green as the Statue of Liberty. 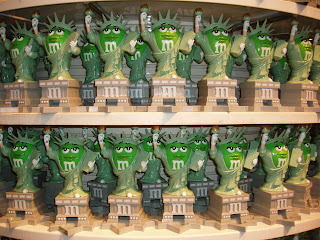 This place is home to the World’s Largest Wall of M&Ms this is just ONE section of it. They sell them in solid colors as well as mixes like “America’s Mix” (red, white, and blue). 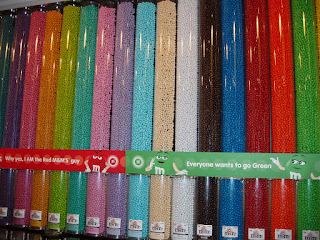 They even sell handbags and other bags made from M&M wrappers by children in Mexico (proceeds going to their village)! These were awesome (and expensive!). 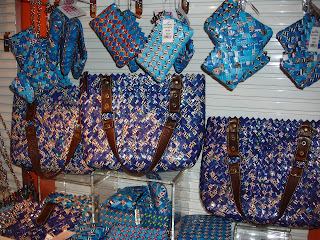 M&M World is definitely a must-see. However, it wasn’t our favorite candy store in NYC. That would be Dylan’s Candy Bar on Third Avenue. As we approached, the heavens opened up and we could hear angels singing. I could be wrong, but I think I saw my older son wipe a little tear from his eye. 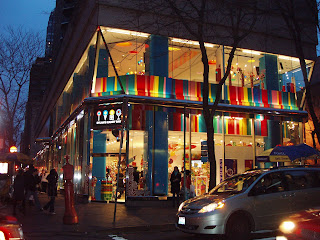 I adore this place; I’ve been before but my family were all first-timers. I was thrilled to discover that they have expanded, going from around 10,000 square feet to about 15,000 square feet since my last visit. The colors and general atmosphere in the place were intoxicating. The background music was ALL candy-themed songs, like Madonna’s “Candy Perfume Girl” or Bow Wow Wow’s “I Want Candy”. I fell in love with this t-shirt. 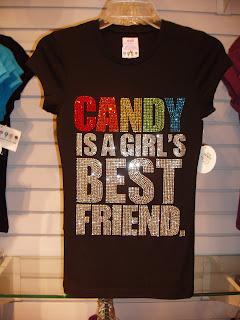 Unfortunately, it was $100 so I had to pass. Maybe this one would have worked too, since I’m a tiara-wearing girl. 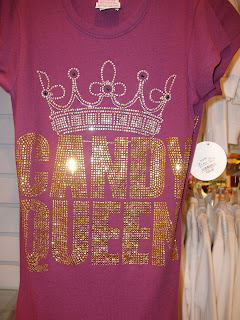 Seeing the older boy so overwhelmed over what to choose was sort of funny to me. He was like–say it with me!–a Kid in a Candy Store! Bwahahahaha! 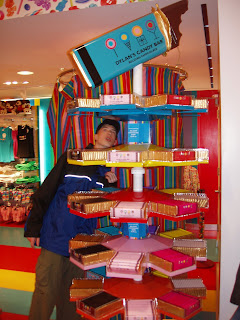 Here’s a wider shot of the place. 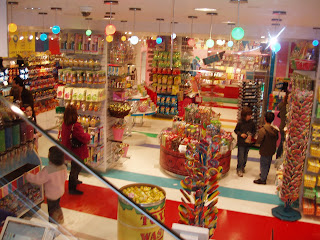 The younger boy found the restroom, and I went in there after he did, discovering this Willy Wonka-esque wallpaper hanging in there. I had to take a picture of it. 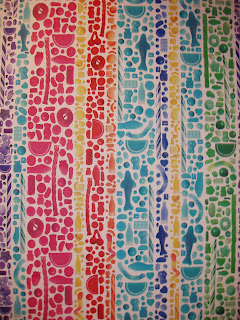 When I found my younger one, I asked him if he licked the wallpaper, cracking up as I asked him. I was shocked and in tears of laughter when he answered, “No. But I DID sniff it. You know, to see if it smelled like candy, which it didn’t. It smelled HORRIBLE!”

My evil German twin wanted to know what kinds of candy the celebrities enjoy, as Dylan’s has a big display case there with autographed containers. Click on the photos to make them larger if you want to check it out! 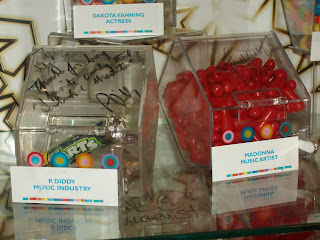 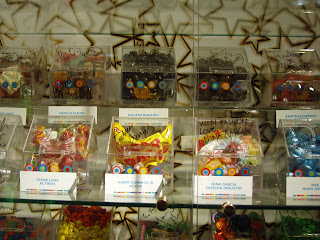 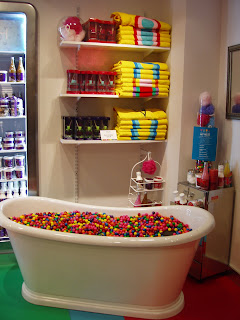 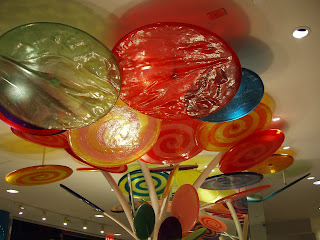 All in all, I could live in that store, and so could everyone else in my family. The idea of a location in Chicago was tossed around a couple of years ago; I hope she (the owner is Dylan Lauren, fashion designer Ralph Lauren’s daughter!) ends up putting one here. We’ll definitely be regulars! (Their website? Click here.)

Tagged as: Fanatics In The Best Sense of the Word, NYC

Next post: Where They’ll Know You’re a Visitor If You Say It Like The City In Texas