There are infinite things to do and see in New York City, depending on your age and interests, though a couple of those things are really “musts” for everybody. One of those “musts” is the Statue of Liberty. She is the most recognized face the world over, and a grand symbol of the American Dream. Like all great monuments, “Liberty Enlightening the World” (her given name) makes a HUGE impact on those who see her in-person, even if they’ve seen photos a thousand times.

When making our advance plans for the trip, I researched the Statue of Liberty to find out what we needed to do to visit. Basically you just have to go through Statue Cruises to purchase a ferry ticket to the Statue and Ellis Island. You have to decide if you want to depart from Manhattan or New Jersey, and you have to decide if you want Monument Access. Basically, Monument Access means that you get to go into the Statue of Liberty museum AND you get to go up to the observation deck in the pedestal, which is just below the very bottom of Lady Liberty (photos coming up!)*. The Monument Access ticket doesn’t cost anything extra, but they only have a limited number of those in each time slot. If you don’t have Monument Access, basically you can ride the ferry to Liberty Island and walk around on the outside only, and of course visit the gift shop.

Unfortunately, Jim and I hemmed and hawed about which day and time we wanted to visit, because we were trying our best to determine when it was going to rain on our trip, and we got locked out of any chance of Monument Access. Shoot.

I bought tickets for Monday morning at 9:00, and we jumped on the subway early to stop at Ground Zero beforehand. The last time I was in New York (with Julesie), they were just really starting to rebuild there. This time, it was full of activity and if I didn’t know that it was Ground Zero, I may not have thought anything about the construction area… 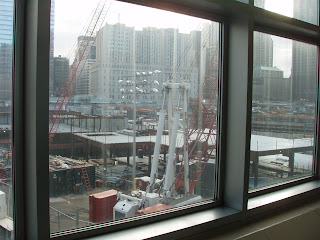 …until we started walking away from it and accidentally came upon the gorgeous (and terribly sad) memorial to the firefighters who fell on September 11, 2001. I can’t tell you how moving it was to stand there, under the scaffolding that was set up for repairs or painting (or something) on the building it was installed on, just the four of us, nobody else around. We took some time to read the tributes and take some photos, and then walked on. 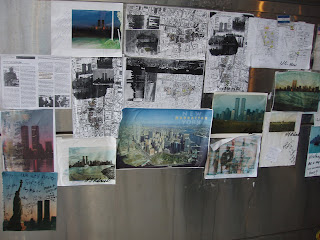 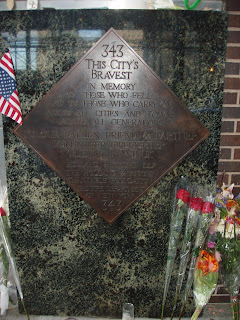 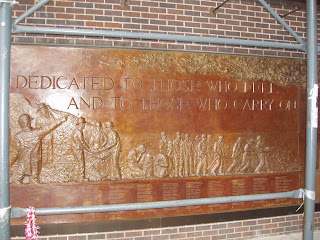 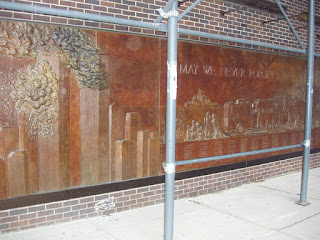 We continued on to Battery Park, which is where we had to catch the ferry to the Statue. Did I mention how gusty it was outside? It felt like winter. 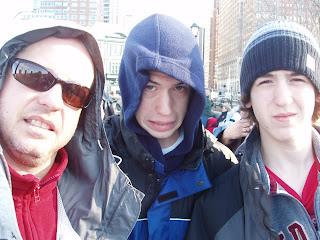 We were all wearing fleece shirts over our regular shirts, and the three of them were wearing their rain jackets over that (I didn’t bring a jacket: just an umbrella. Idiot.); normally this is not a problem. The wind, however, was CUTTING through. It was crazy. We looked at the waters and couldn’t believe how choppy it was. We were never so excited to get inside a building to be screened for security.

You can guess how the ferry ride went. It’s a good thing that none of us are prone to motion-sickness, because it would have been ugly otherwise! (Although the boys and I had a bit of fun singing the SNL digital short “I’m on a Boat”)

Upon arriving at Liberty Island, we were told that if we had Monument Access (boo! we didn’t!), we could proceed to the second security area for screening. If we didn’t, we could enjoy (in this wind? Nuts.) the outdoor activities. Bah, humbug.

We noticed a sign advertising “Free Park Ranger Tours” of Liberty Island. I said to Jim, “Why not?” So we went to the flagpole to meet the ranger and found that we were four of six in the tour, the other two being an exasperated mom with her hyperactive little boy. It was practically private!! Our tour guide (Jim the Ranger!) was awesome, and he gave us a 40-minute tour that included the entire history of the Statue. It was very informative and we learned so much that we had no previous idea about. For example, did you know that Lady Liberty is actually posed as if she is *walking*, and she has broken shackles around her ankle that can only be seen from above, like in a helicopter?

After our tour we got to ask questions, and Jim the Ranger took a family photo for us. 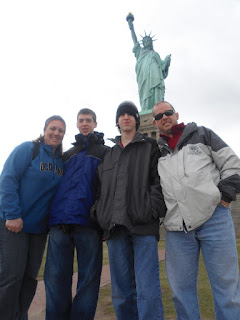 He also treated us to an extra special bonus when he uttered these magical words:

“You’ll be happy to know that I give people who put up with me for 40 minutes access to the Monument, and I even cut them in front of the security line.”

So cut in line we did! The museum was really cool; the original torch is there. They built a new one during the 1986 restoration of the Statue, one with gold leafing on it (looks much better!). 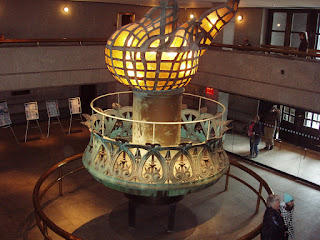 We also saw molds they used in the restoration process, and a actual-sized foot, so we could see just how huge her tootsies are. After looking around in the museum, we were excited to go up into the pedestal. It was something like 180-something steps up. The younger boy asked, “Don’t they have a climb like this in the John Hancock building?” (For charity) I replied, “Yes, but you have to go up just a couple more steps than this.” (By about 84 floors)

When we got to the top, we got to look up her dress. We’re not pervs; everyone was doing it. 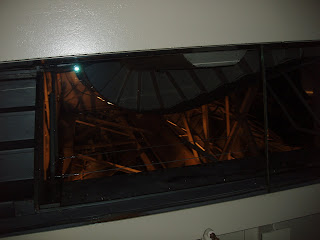 From the observation level, we got some great shots of the Manhattan skyline, 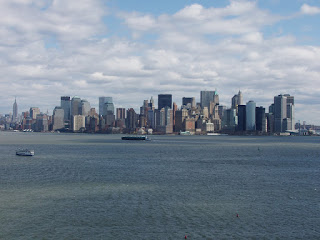 and closer-up views of Lady Liberty from beneath her, which sounds terrible. But you know what I mean. It was dizzying, leaning backwards over the wall of the deck to take these photos. I hope you appreciate how I risked barfing for you people. 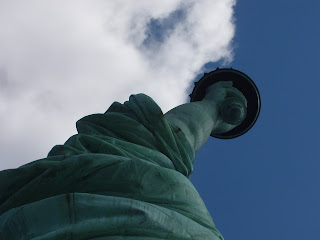 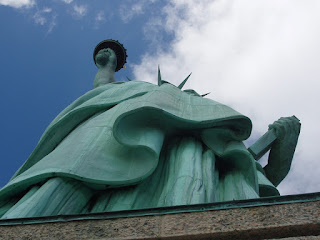 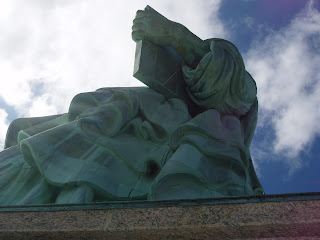 Hey, how about you enjoy these great shots I got after climbing back down? 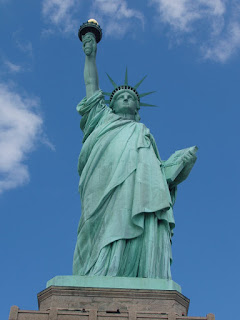 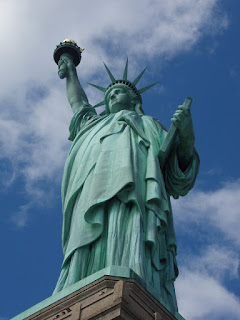 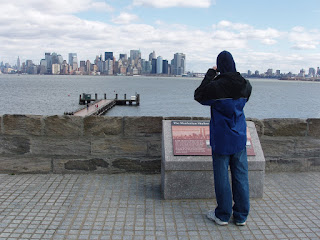 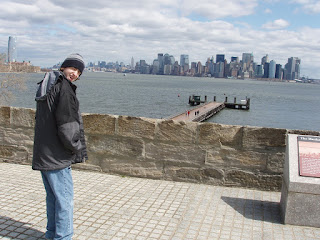 Lastly, on the ferry ride back (we had been there for three hours and voted to skip Ellis Island on this trip), we actually discovered the orchestra from the older boy’s high school! On the same boat! Crazy!

More pics, and a video too: 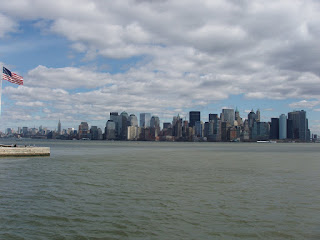 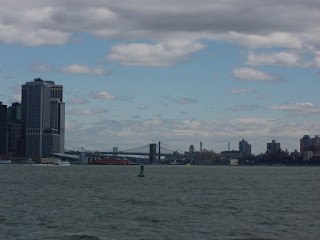 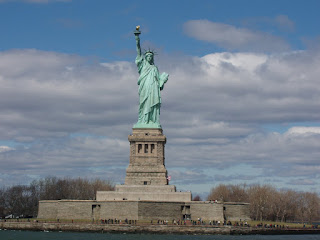 *Visitors used to be able to go all the way up to her crown, but years ago that practice was discontinued. Apparently there is a movement to get the crown reopened, but after the day I spent there and all I learned, I disagree with it. The Statue of Liberty was not built anticipating that 20,000 visitors each day would want to go up into her crown (that’s their average number of visitors per day!); that’s a lot of usage. Too much usage for that kind of thing. I say, keep it closed and protect the integrity of the structure.

Previous post: Getting There Is Half The Fun, Sort of. But Not Really. Being There Is Really Most of The Fun.