One of the most anticipated elements of our trip was a visit to Manny’s Music, which is–unfortunately–closing next month.

The younger boy had been reading the book that Julesie got for him as well as listening to some classic rock tunes; he was super-psyched about going and trying out a couple of guitars in a place where the greatest rock-and-rollers of all time have done the same thing. 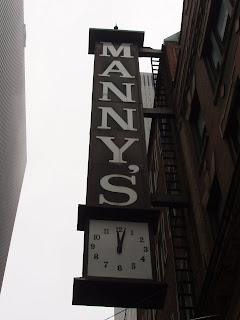 Our first stop once inside was to take a photo of him posing next to “Old Yellow”, a beat-up guitar that was used by Jimi Hendrix, George Harrison, Eric Clapton, and many others when they were trying out different amps. Rockers have begged to buy this mess of an instrument because of the history involved with it, but Manny’s instead put it in a plexiglass display case. 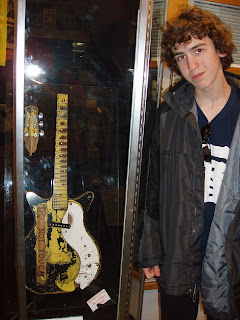 As I mentioned in that other post, the walls of Manny’s are covered–and I mean COVERED–in autographed photos from too many musicians to count. It was really fun to read some of them, and to look for some of our favorite artists. They’re really all there! 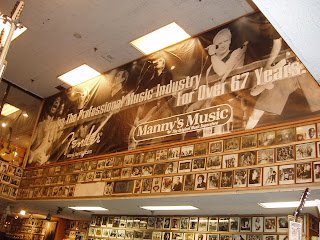 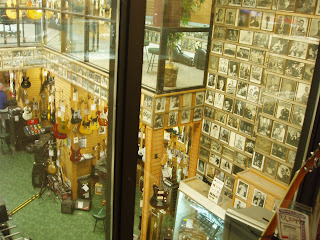 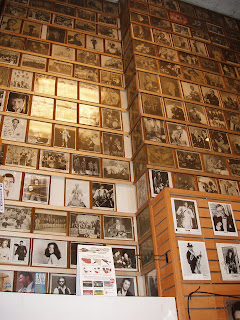 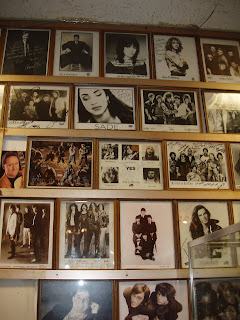 I had to snap a photo of this one; Sophie B. Hawkins is one of Julesie’s favorite artists. 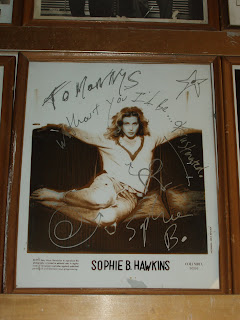 And this one by Keith Richards totally cracked me up. He’s such a kidder. 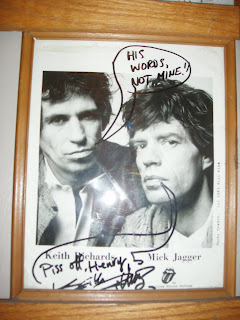 When it was time to try out some guitars, a super-friendly guy named David was happy to assist our kid. First we started in this guitar area. 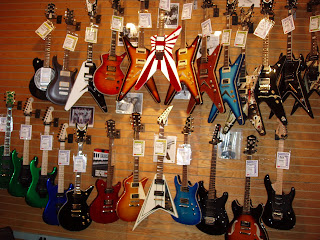 David told the boy he could try any guitar he wanted. Weirdly enough, he chose a guitar almost identical to the one he has at home. When I said, “Hey, why not try something different???” David said, “It’s alright, he wants to try something familiar!” Eventually we moved up to the “high-end room”, where David told him he would probably “lose his mind!”: 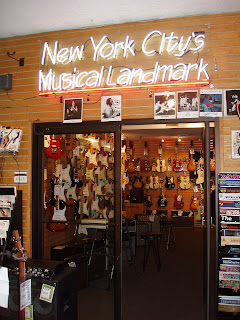 With gorgeous instruments like these, David told the boy that he was going to be more selective about what he would hand him to play, since these are the really expensive ones and people who are actually shopping to buy one don’t want a guitar that’s been handled by tons of folks. 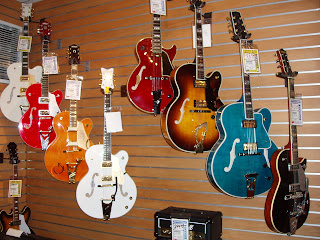 He ended up selecting a brand-new black Les Paul Standard. David told him that he was only the third person to ever play that particular guitar, which thrilled him. (Check out that price tag: yikes!) 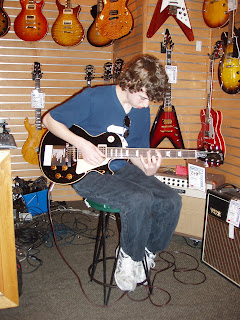 Once he got his hands on that beauty, he promptly retreated to his own little musical world and jammed for about 20 minutes, until David came back to rip it out of his hands gently tell him that time was about up and the guitar needed to return to its place on the display wall.

Julesie mentioned that he probably won’t absorb what a big deal it was that he was in that store–a true slice of musical history–for a really long time, and I agree. But I think we’ll all remember how just plain cool the experience was, forever.

Next post: Imagine…Being in a QUIET Oasis in the Middle of NYC!