I don’t do anything small. It’s a personality trait, I guess. My sister’s got it bad, too. Our mom started it, I guess. And, I would imagine, our grandmother was just as “bad”. Individually we are pretty creative, but add one or two more of us and the combination is lethal. Give us a simple task and our brains start to spin with ideas on how to make it better, stronger, faster, more impressive, and shortly after that, we RUN with it. Remember our “Amazing Race” premiere party? That’s just one example. I have been called “Martha” more than once (way more) in my life. I don’t know how to just get a job done without going overboard. I wish I did. I always find things that could be done more creatively, to make it “more fun”, or something like that. (You should have been to the boys’ birthday parties as they grew up!)

The older boy’s Eagle Project (which will be DONE this Sunday: Yippee!) came up short on hardscape and plant donations (by an estimated $1500), and it is really important to him (and the rest of us) that we exhaust fundraising ideas so that he doesn’t have to rely on our temple (the recipient of this landscaping project) to actually pay much, if any, money towards it. We decided to have a bake sale. Julesie was totally on board; baking is in our blood and probably in our top five, skill-wise. (Don’t ask me for the other four; I just threw that number out there!)

I arranged to have the Bake Sale on this past Sunday, which was the first day of work on the landscaping. We planned to put everything into packages that would be sold for $1 each, to make things easier. We would set up a table in the temple lobby and run the sale before, during, and after religious school. Julesie, who has a long-standing quarter bet with Jim that she will never, EVER do any kind of yardwork or gardening again due to the fact that our parents used to make us spend weekends weeding our yard, especially under the very low-hanging (read: UNTRIMMED) branches of a rather large magnolia tree in our front yard, where we would crawl around on our hands and knees and become miserable quite quickly, was all up in the Bake Sale, because it allowed her to make a huge contribution to the project without actually getting near the project. She would sit at the tables and run the sale alone when I taught during first session, and then I would join her.

So we started making our baking lists. I had several friends who offered to bake but only firmed up details with two of them. By the time I thought of talking to the others, it was too late in the week. Ahh, whatever. Julie and I could certainly handle a little bake sale.

Julesie had her own list (I had no idea how big it was but shouldn’t have been surprised!), which she would take care of at my house on Saturday. She also came up with the brilliant idea of making a Junior’s cheesecake, giving out samples, and having a raffle for one as well as taking orders for them. (I told you, Go Big or Go Home!)

We also got bagels donated from a local business, which the older boy would pick up on Saturday evening.

I had to bake on Friday afternoon. I could technically say that it’s because Shabbat (the Sabbath) begins at sundown on Friday and I’m not supposed to do any work from then until Saturday at sundown, but to be honest, we’re not *that* observant over here; it’s because we had that wedding on Saturday. I was in that stinkin’ kitchen from about 1:45 p.m. until 12:30 a.m., with the exception of leaving the house to go out for a quick dinner. I made everything except for the caramels and the blueberry muffins, and though I mixed the truffles up, I didn’t roll them into balls; that would wait until Saturday morning. I doubled or tripled every recipe.

On Saturday morning, I started cooking the caramel before going to teach my class. I doubled that recipe too, which doubled the cooking time. The recipe called for cooking it to “firm ball stage”. Good time to curse myself for not having a candy thermometer on hand. Oops. Oh well, I’d just wing it.

The problem? Since it was taking forever to cook the caramel and I had to stir it constantly, I had to do the truffles with my other hand if I was going to make it to class on time.

I was stirring the caramel with my right hand and, with my left, rolling chocolate into balls and then in colored sugar. Unfortunately, nobody else was out of bed yet because I would love to have been able to show you a photo. I probably even had crazy bed hair at the time; the photo would have been great. You’ll just have to imagine it.

I got the truffles done and the caramel *seemed* like it was at Firm Ball, so I poured it into the pans to cool for the day before I cut those babies into squares and wrapped them in the wax paper rectangles that Julesie cut for me the night before.

Fast forward to Saturday night. We came home early from the wedding (9:40ish?); of course this wedding was in the northwest suburbs and there is really no straight line to get there; it took 90 minutes each way!

Julesie had a kitchen and dining room FULL of what she and the kids had made: the cone cupcakes, a pan of chocolate brownies covered in ganache, some nut-and-Rolo thingies, some chocolate (strawberry ones too) sandwich cookies with a cream cheese frosting in the middle, the cheesecake…was there more? I can’t remember!

It was at that point that I decided not to make the muffins.

I retrieved the pans of caramels and a knife, and was shocked to learn when I tried to stick the knife in that they were hard as rocks. “EEEEK!”

And so, I did. I tried it, and boy, was it good! It tasted EXACTLY like a See’s Candies Lollypop. EXACTLY. I bagged up the little pieces, tied them off with a twist tie, and they were ready to go.

I made labels for lots of my stuff (just plain wording that stated what each thing was), and as it turned out, Julesie did too. But she made these fancy, customized labels (Go Big or Go Home) that had a photo of us as little girls on it and a space for writing what baked good it was identifying. They were ADORABLE. Sure, 75% of our customers would be children who would rip the packaging off of whatever they bought without looking at it, but *we* knew it looked good.

We had been concerned about transporting the frosted cone cupcakes to the temple (they were already top-heavy, because Julesie’s recipe recommended that instead of filling the cones 2/3 full and baking them that way, she should fill cupcake tins 2/3 full and stick the cones straight down into them, making a better looking faux ice cream scoop on top), and I came up with the idea that Julesie should frost them while AT the temple. That was a great idea, I have to say. It made getting them there SO much easier!

And then I started to panic a little bit: we had SO MUCH STUFF. It was embarrassing and I was worried that we would be left with most of it to take home. I sent out e-mails to our troop and to my local Facebook friends, begging them to stop by and buy some baked goods. I even texted Weaselmomma and Deanna, because they live the closest.

We got up bright and early on Sunday (Julesie stayed here overnight), and we were exhausted. We headed over to the temple with all our wares and began setting up before I had to head to class. To give you an idea of how much stuff we had, I will tell you that we *filled up* almost three banquet tables. Yep, that’s right. Go Big or Go Home. 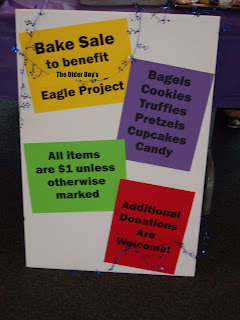 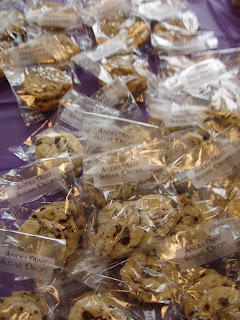 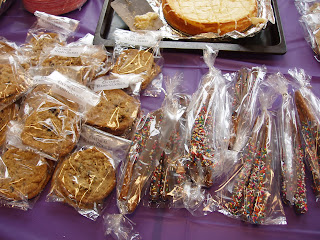 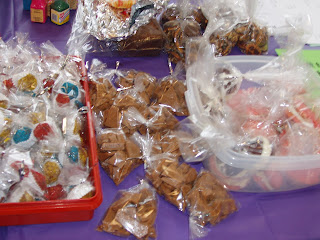 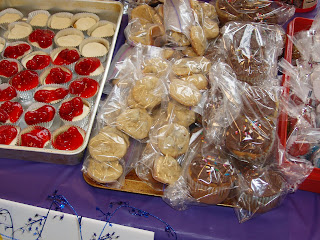 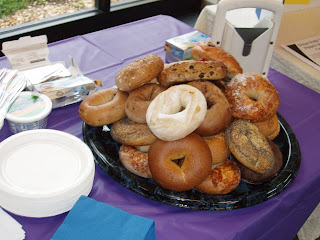 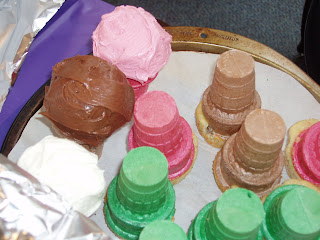 I went to class as Julesie got to frosting the cone cupcakes. They looked tremendous. 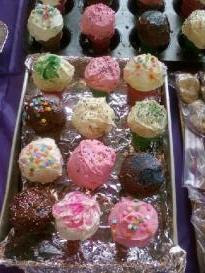 When I came out of my first session class, I couldn’t believe the crowds at the table. It was like a feeding frenzy. In fact, my temple friend L had jumped in to help Julesie. (If you’re reading this, THANK YOU!)

People were throwing in extra donations like crazy. Even kids were choosing 2 or 3 items and then handing us a five, saying, “Keep the change!” I think it really helped that the project was going on right outside. The morale at the temple was really high and it was a really fun day.

So you want to know how we did? I’ll tell you. Including a very generous donation check that was handed to me by a friend, we made…

That’s right. I couldn’t believe it myself.

And, almost as great? We ended up with a cookie sheet and a half of leftover goods. We got cleaned out. It was glorious.

Julesie e-mailed me later that day about something else and included this, regarding the bake sale:

“I forgot to tell you that no less than 5 people asked me if we do ‘this kind of thing’ professionally. I think they got their answer when they saw one tear rolling down my cheek.”

But that’s how we roll. We may sob at the end of it, but we always Go Big.

Tagged as: Help, I Come By It Honestly

Previous post: Boy Scouts Should Really Be a Dad-Son Thing. Unless Mom Wants In.